Mouka made a wholesome donation of 10 professional computer systems to the Nigerian Armed Force Resettlement Centre (NAFRC). This was to support the centre’s vision of becoming a world-class training institution for ex-servicemen and women who have made the nation proud in their duties as military officers while in active service. 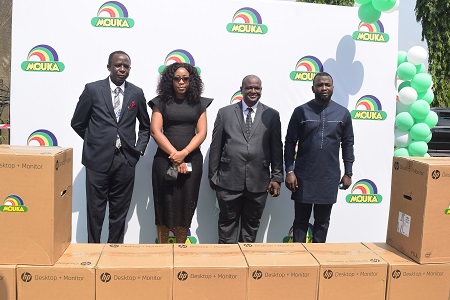 Mouka made the donation at the NAFRC training centre during the passing out ceremony of Trainees Course 02/2020 Stream Two of ex-service military personnel. This act was also to commemorate the Nigerian Armed Forces Remembrance Day which holds annually on January 15.

Presenting the gifts to the NAFRC Commandant, Air Vice Marshal Isiaka Oladayo Amao, in the presence of the Chief of Defence Staff, General Abayomi Gabriel Olonisakin; the Chief Commercial Officer (CCO), Mouka, Dimeji Osingunwa, said the company is happy to step up and support the centre’s vision of becoming a world-class training institution for ex-servicemen and women

Osingunwa was accompanied by other Mouka staff, including the Chief Operating Officer, Femi Fapohunda, the Head of Marketing, Tolu Olanipekun and Senior Brand and Innovation Manager, Akeem Audu.

Mouka’s CCO pointed out that the company also wishes to acknowledge the centre’s valuable role in adding value to the lives of members of the armed forces after their patriotic input to nation-building, by providing training to enable them to cope with challenges of reintegration into civil life.

Osingunwa said the company would continue to support the military and the NAFRC vision of becoming a world-class training institute through effective collaboration.

According to him, computer literacy is a must for all, even for the ex-servicemen and women in today’s digital world. “Everything around us is driven by technology. The computer has become an essential tool of learning and access to globally required skills, and that the ex-military personnel will find them useful for their career and personal growth,” Osingunwa affirmed.

In his remark, the NAFRC Commandant commended Mouka for enhancing the training centre, which he said will help equip the ex-military personnel who will put them into use.

The company leading in the manufacturing of branded mattresses and pillows in the country had also demonstrated its resolve in promoting Nigerian’s wellbeing through the recent presentation of gifts to mothers of first babies born on January 1, 2021. 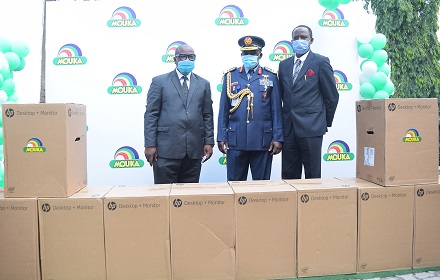 Other goodwill acts include donations of over 1,000 mattresses to Lagos, Ogun and Oyo States government to enhance their COVID-19 isolation centres. Mouka also aided the Abule Ado gas pipeline explosion victims who were in dire need of assistance with 200 mattresses.

As the promoter of healthy sleep, Mouka has a portfolio of quality products such as Wellbeing orthopaedic mattresses, Klinic hospital mattress, Dreamtime water-resistant mattress, and a wide range of pillows to help Nigerians sleep well and wake up refreshed.

MultiChoice Brings Back Special Step Up Offer on DStv, Discount on GOtv Max this January

Nigeria is Better than I Met it, Says Buhari