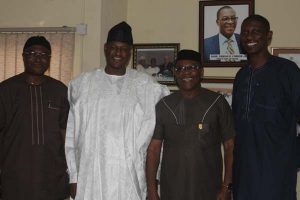 The N220 billion Micro, Small and Medium Enterprises (MSMEs) loans earmarked by the Federal Government  for Small and Medium Enterprise Development Agency of Nigeria (SMEDAN) has said that the conditions for accessing are too tough.
The Director-General, SMEDAN, Dr Dikko Umaru, disclosed this while reponses to newsmen at the meeting with the Commerce and Industry Correspondents Association of Nigeria (CICAN) on Friday in Lagos, that only about N80 billion out of the N220 billion had been disbursed so far since 2012.

Umaru also revealed that the agency had been in talks with the CBN to further make it easier for more SMEs to access the funds.

“If we really want SMEs operators to access this fund, we need to relax the conditions.“We urge the CBN to look into this, because most of our small businesses are barely struggling to survive as they cannot access the funds meant for them.

“At SMEDAN, we can serve as referrals to the bank on behalf of the SMEs, because we know them inside out, there are our clients.

“We also need a lot of collaboration with other relevant agencies and strenghtens our leverage especially in the area of training SMEs operators and show them the way  of sourcing for funds to grow their business with less stress.

“Many of the SMEs have already been ladened by regulatory conditions, taxes and poor infrastructure.

“So, as stakeholders, we should device a means of lending more support to them,’’ the SMEDAN boss said.

Umaru also decried the poor state of infrastructure by the agency’s training facilities which included low working capacity at the state offices and inadequate manpower to meet up the demands of SMEs.

As a means to independently generate funds, he suggested that SMEDAN “is seeking federal government legislation back certain percentage of the taxes or levied on imported luxury goods which SMEs can produce in the country.’’

According to him, this will enable the agency generate more funds to augment government’s allocation in order to perform better.

Also in response to filing question on scrapping bank of industry, he said I wondered how some people could call for the scrapping of the only retailer bank in the country and plant it with wholesaler bank.

“We are worried that despite the available of bailout fund by Federal Government to promote small scale entrepreneurs, many of the people in the SME are not aware of such funds. Those having the knowledge are not able to access it because most of them are not meeting the requirements.

“Thanks for Bank of Industry (BoI), it has been doing its best in ensuring that the fund is accessed and used for the purpose for which it is set up. By now, there should have been more small enterprises-oriented banks that would function in the same line with BoI.”

Umaru stressed that “It is wrong to scrap BoI whereas we need more banks like that to cater for the SMEs. As BoI is a retailer bank whereby it is only bank dealing directing with customers, it would be wrong to scrap it or establish a wholesaler bank in place of BoI.”