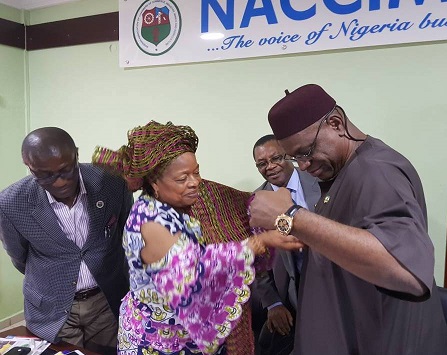 The National Association of Chambers of Commerce, Industry, Mines and Agriculture (NACCIMA) has commended the Standards Organisation of Nigeria (SON) capacity development to support import and export in Nigeria.
President of the Association, Iyalode Alaba Lawson gave the commendation in Lagos while welcoming the Director General of SON, Mr. Osita Aboloma to the Inauguration of special committees for the running of the Association’s affairs.
She acknowledged the added value that the SON internationally accredited Laboratories would provide for import and export in Nigeria,  particularly for agricultural products.
Iyalode Lawson also expressed the backing of NACCIMA for SON planned implementation of a products authentication scheme before the end of year. She asserted that such scheme was long overdue to tackle the challenge of products cloning and adulteration.
According to Iyalode Lawson, the long standing collaboration of SON with NACCIMA will be further enhanced during her tenure as President. She thanked the SON DG for his demonstrated commitment to standardization and quality assurance ideals since his assumption of office.
She then decorated the SON Director General as honorary member of NACCIMA.

Speaking earlier, Mr. Osita Aboloma sought the input of NACCIMA as a major stakeholder in the planned introduction of a product authentication scheme by SON before the end of the year.
He described NACCIMA members as critical Stakeholders in standardization, urging them to participate more in development and review of Nigerian Industrial Standards for products and services.
Mr. Aboloma also invited NACCIMA members to join SON and other Stakeholders in actively participating in international standards development.
Presenting a paper on “Importance of Quality Adherence to Imports/Exports in Nigeria” at the occasion, SON Head of Product Certification, Mr. Tersoo Orngudwem urged NACCIMA members to take optimum advantage of the SON internationally accredited laboratories for import and export.
This according to him will substantially reduce the incidence of export rejection and dumping of substandard products on Nigeria.
According to him, SON has over the years developed requisite capabilities in testing for export through its robust relationships with other National Standards bodies across the globe as members of the International Organization for Standardization (ISO).