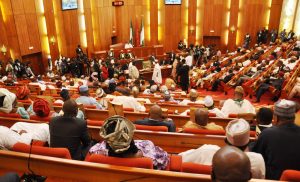 The House of Representatives on Tuesday concurred with the Senate by passing a bill amending the Offshore and Inland Basin Production Sharing Contract Act 2014.

In an accelerated process, the House considered the bill for second and third readings at the plenary.

Our correspondent later obtained a copy of the bill.

Among others, the lawmakers amended Section 5 of the principal Act, which now reads, “(1) Royalties shall be calculated on a field basis. The royalty shall be at a rate per centum of the chargeable volume of the crude oil and condensates produced from the relevant area in the relevant period as follows: In deep offshore greater than 200 metres water depth – 10 per cent; in frontier/inland basin – 7.5 per cent.

“(2) Royalty by price is adopted in order to allow for royalty reflexivity based on changing prices of crude oil, condensates and natural gas. This also replaces the necessity for Section 16 of the principal Act.

“(3) The royalty based on price shall be identical for the various water depths in deep offshore – beyond 200m water depth, including frontier acreages for crude oil and condensates.

The National Assembly also inserted a new Section 17 that read, “The minister (of petroleum resources) shall cause the corporation (Nigerian National Petroleum Corporation) to call for a review of production sharing contracts every eight years.”

A new Section 18 also criminalised any abuse of the law and prescribed punishments.

It read, “Any person who fails to comply with any obligation imposed by any provision of the bill commits an offence and is liable on conviction to a fine not below N500,000,000 or an imprisonment for a period not (more or less: not indicated) than five years or both.”

The Speaker, Femi Gbajabiamila, noted the issues raised by some lawmakers regarding the petroleum production sharing contract and the PIB.

He said, “We have noted the contributions by Honourable Isiaka Ayokunle and Honourable Toby Okechukwu. I am sure that as we go on, in the future, there might be the need to merge this with the PIB when it eventually comes up again.”

The Senate on October 15, 2019 unanimously passed the bill. The Senate President, Ahmad Lawan, had said Nigeria would be at least $1.5bn richer in 2020 as a result of the amended bill.

The upper chamber of the National Assembly had discovered that the IOCs had failed to remit a total sum of N7tn ($21bn) to the Federal Government in the last 26 years based on non-implementation of the PSC Act.

Oil firms such as Chevron, Exxon Mobil, Shell and South Atlantic Petroleum were mentioned during the debate on a motion sponsored to that effect by Senator Ifeanyi Ubah.

In a statement issued in Abuja on Tuesday, the Executive Secretary, NEITI, Waziri Adio, described the amendment as long overdue and commended the 9th National Assembly and the Presidency for breaking the jinx with the action taken to amend the law.

He said the development was quite consistent with NEITI’s agitation for urgent amendment of the law to forestall further revenue losses to the federation.

Adio recalled that in March 2019, NEITI published a policy brief entitled, “The 1993 PSCs: The steep cost of inaction,” which revealed that Nigeria lost between $16.0bn and $28.61bn within 10 years for failure to review the terms of the PSC agreement in 2008 as required by the law governing the PSCs.

The NEITI boss expressed confidence that with the amendment, the revenue generation for the federation in the PSC arrangement in the oil and gas industry would witness significant improvement.

In a related development, the Federal Government has commenced moves aimed at reducing crude oil production cost from above $30 per barrel to below $10.

To achieve this, it asked operators to come up with measures that would help government cut down the cost.

The Minister of State for Petroleum Resources, Timipre Sylva, said this on Tuesday at a seminar on ‘Effective cost management in the oil and gas sector.’

The seminar was organised by the Petroleum Technology Development Fund and the Quantity Surveyors Registration Board of Nigeria.

Sylva, who spoke through his Chief of Staff, Moses Olamide, stated that by reducing crude production cost, Nigeria would be able to boost its revenue.

“It is interesting to note that some countries like Kuwait and UAE (United Arab Emirates) are producing at less that $10 per barrel. In the regime of $50/60 per barrel price of crude oil, a cost of over $30 is unsustainable.”

Kindly Share This Story: MEMBERS of the Independent Petroleum Marketers’ Association of Nigeria (IPMAN) have…