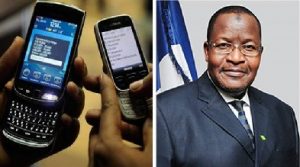 The Nigerian Communications Commission says it would impose on mobile operators a fine of N5m per subscriber that continues on unsolicited text messages despite opting for the option of Do Not Disturb provided by mobile service providers.

Executive Vice Chairman of NCC, Prof. Umar Danbatta, said this in Abuja on Tuesday at the opening of a training for academics on the procedures and opportunities available at the International Telecommunications Union.

He said for any subscriber that shows that they have chosen the Do Not Disturb option available from their mobile service providers but continues to receive unsolicited text messages; NCC would probe the concerned service provider.

According to him, when it had been established that the service provider erred, NCC would not only insist that the subscriber should be refunded for whatever that must have been charged by the operator, it would also impose a fine of N5m for each subscriber that had been violated.

Danbatta said the regulatory agency would focus on customer satisfaction in 2017 but regretted that only one per cent of mobile subscribers in the country have utilised the DND service.

He said the agency would embark on massive education and awareness campaign to ensure that at least 50 per cent of subscribers can make use of the service instead of complaining continually about unwanted text messages.

Speaking to academics attending the training programme, Danbatta said the work of ITU was carried out within three study groups in three areas – radio communications, standards, and developments and urged them to explore how they could fit into the system.

In the same vein: the Association of Telecommunications Companies of Nigeria (ATCON) has called on regulators in the Information and Communication Technology (ICT) industry to consider merging.

ATCON’s President, Olusola Teniola, said that the absence of a converged regulatory environment was preventing convergence of services in the industry.

Teniola on Tuesday in Lagos claimed that there had been the reluctance to embrace convergence by relevant government agencies and commissions in the ICT sector.

He said that bureaucratic bottleneck frustrated efforts of the immediate past Minister of Communications, Dr Omobola Johnson, to actualise the convergence.

According to him, the coming together of all the establishments will accelerate the process.

“Convergence refers to the integration or merging of previously separated services in telecommunications/telephony, media/broadcasting and internet technologies into a single technological unit.

“The practical consequence is interoperability and the ability to access and operate services through a single device, for example, accessing the internet or broadband through a mobile phone.

“However, convergence is not complete in most developing countries, such as Nigeria.

He said that this placed major obstacles, which slowed down network expansion needed for convergence.

The ATCON president said that the Federal Government, through the Nigerian Communications Commission, had the exclusive right to regulate the telecommunications industry.

“It has become a common practice for any government agency; be it federal or state to solicit for one levy or the other from operators.

“Some demand that operators secure approval from them, which come with high fees, before they can build infrastructure.

Section 6.5 of the National ICT Policy, 2012, recognises the need for a converged regulator.

The section provides that the converged regulator will consist of departments, including telecommunications, information technology, broadcasting and postal, each of which should be headed by an executive commissioner.

It adds that the roles of the converged regulator shall be to develop and administer a comprehensive regulatory regime for the ICT sector.

No money: MMM freezes out Mavrodians