…As Minister commissions 11 new IT projects

…the President is committed to digital economy vision, says Danbatta

The Nigerian Communications Commission (NCC), the Universal Service Provision Fund (USPF) and three other agencies under the Ministry of Communications and Digital Economy have continued to implement people-oriented projects to advance the digital economy agenda of President Muhammad Buhari. 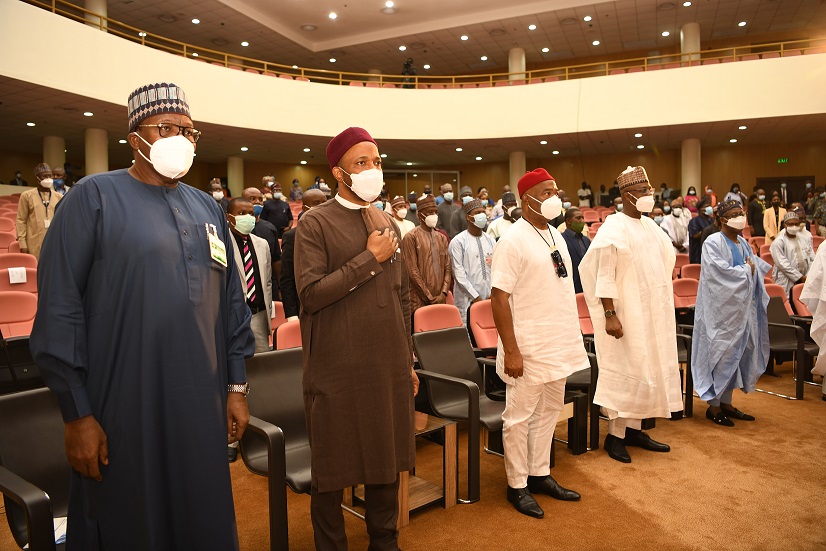 L-R: Executive-Vice Chairman, Prof. Umar Danbatta; Minister of State for Education, Chukwuemeka Nwajiuba; Governor of Imo State/Chairman of the Occasion, Hope Uzodinma; Minister of Communications and Digital Economy, Dr. Isa Ali Ibrahim Pantami and Minister of Information & Culture, Lai Muhammed, during the virtual commissioning of 11 new ICT Projects located across the country which were executed by agencies under the Ministry in Abuja on Tuesday, August 11, 2020.

Their commitment in this direction was, once again, demonstrated during the virtual commissioning of 11 new Information and Communications Technology (ICT) projects implemented by the agencies under the Ministry of Communications and Digital Economy by the Minister, Dr.  Isa Ali Ibrahim Pantami, in Abuja at the Digital Economy Complex on Tuesday, August 11, 2020.

The projects, which were commissioned virtually across the country by the Minister include the Emergency Communication Centres (ECC’s) in Ilorin, Kwara State and Calabar, Cross River. Other projects commissioned include the e-Health/Data Sharing Centre,  Medical College, Abubakar Tafawa Balewa University, Bauchi; and Virtual  Examination Centre, University of Maiduguri,  Borno State,  all implemented by the NCC.

Speaking at the commissioning, Pantami, who noted that over 500 projects have been executed by agencies under the ministry in the past five years, said the projects are connected to the tripartite agenda of the President focusing on enhancing national security, diversification of the economy and curbing corruption.

Pantami stated that the 11 projects are in sync with seven of the eight pillars of the country’s National Digital Economy Policy and Strategy (NDEPS) unveiled by the President last year. He thanked the President for being supportive of the Ministry’s initiative towards addressing extant challenges of vandalism of telecom infrastructure, Right of Way (RoW) issues, among others in order to accelerate broadband penetration to 70 per cent as envisaged by the National Broadband Plan (2020-2025).

Chairman, NCC Governing Board, Prof. Adeolu Akande thanked the Minister for the visibility he is giving the projects being executed by the agencies under the Ministry. While the Executive Vice Chairman of NCC, Prof. Umar Garba Danbatta, reiterated the commitment of the Commission towards implementing policies and programmes aimed at fast-tracking the advancement of digital economy vision of the Federal Government.

The event was well attended by governors and ministers, who were special guests among whom were the Governor of Imo, who was Chairman of the occasion, Governor of Gombe State, Minister of Interior, Minister of State for Education, Minister of State for Mines and Power, as well as the staff of the Ministry, board members and heads of agencies under the ministry, among others. The special guests commended the Minister for commissioning the important projects and for enhancing synergy between the Ministry and its agencies.