Kindly Share This Story:
The Nigeria Customs Service (NCS), Federal Operations Unit (FOU), Zone ‘A’ Ikeja, Lagos in the months of January and February 2017 having deepened its anti-smuggling operations intercepted various contrabands and other goods on detention with a duty paid value (DPV) of Seven Hundred and Thirteen Million, Eight Hundred and Thirty Eight Thousand, Nine Hundred and Fifty Naira only (N713,838,950.00). 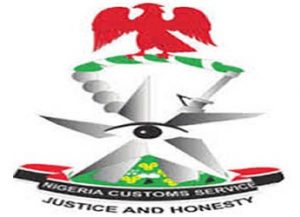 In same vein, the unit through its interventions recovered Six Hundred and Fifty Million, Three Hundred and Fourteen Thousand, Four Hundred and Thirty Six Naira, Ninety Kobo only (N650,314,436.90) from duty payments and demand notices on general goods that tried to beat the system from seaports, airport and border stations in the guise of false declaration, transfer of value, and shortchange in duty payment that are meant for the Federal Government of Nigeria, making a cumulative of  One Billion, Three Hundred and Sixty Four Million, One Hundred and Fifty Three Thousand,  Three Hundred and Eighty Six Naira, Ninety  Kobo only (N1,364,153,386.90)
While commending the Officers and Men of the Unit for living up to their statutory responsibilities in suppression of smuggling, blocking all revenue leakages and enhancing trade facilitation towards sustaining best international standards, the Controller, Federal Operations Unit ‘A’, Comptroller Haruna Mamudu thanked the Comptroller General of Customs Col. Hameed Ibrahim Ali (Rtd) for his effort in recognizing hard work and diligence to duty without any compromise
In the months under review, 197 different seizures were recorded comprising foreign parboiled rice, frozen poultry products, vegetable oil, smuggled vehicles, Indian hemp, arms, fake pharmaceutical/medicaments and various general merchandise.
See breakdowns below:
Notably, 23000 bags of 50kg of foreign parboiled rice with a duty paid value of One Hundred and Forty Nine Million, Five Hundred Thousand Naira only N149,500,000.00 is still under seal in an unnamed warehouse in Lagos awaiting relevant importation document for further necessary action. While, Demand Notices (DN) worth over N100million has been issued to two auto dealers/assemblers under customs seal awaiting payment for infractions on their import transactions, while some are still undergoing court trials. Over 16x40ft containers under detention are on thorough investigation and appropriate DN would be raised and seizures effected where applicable
You will recall that the unit evacuated 1,870 Bags of Smuggled Foreign Parboiled rice and 43 Jerrycans of Vegetable oil from the front of an unnamed warehouse in Sango Ota Motor park in Ogun State by our field operatives based on information, monitoring and trailing of some dare devil smugglers’ activities through unapproved routes using Commercial Motorcycles popularly known as ‘Okada’ and Smaller Vehicles ferrying on a very high speed and other concealment methods in carrying out their nefarious acts.
Following the tactical operation and successful evacuation, that later led to protests and breakdown of law and order by some angry traders, the Controller Federal Operations Unit Zone ‘A’ Comptroller Haruna Mamudu has further challenged those who might have genuine importation document from the seaport to come forward for their claims rather than breaching the law of the Land.  He added that the Unit’s action is in conformity with the law of the Federation of Nigeria as enshrined in sections 147, 148, and 158 of the Customs Excise Management Act (CEMA) Cap C45 LFN 2004.
The Controller appealed to all well meaning Nigerians to see smuggling as a crime, evil, and threat to national development And security. He added that the war against these economic saboteurs is a collective responsibility of every patriotic Nigerians He therefore enjoined all hands to be on deck on the fight against smuggling rather than aiding and abetting these criminal elements.