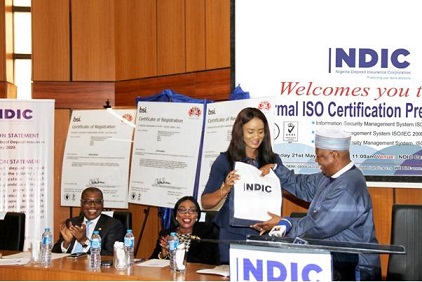 The Nigeria Deposit Insurance Corporation (NDIC) has become the first public sector organization in Nigeria to be awarded three International Standards Organization (ISO) certifications by the British Standards Institute (BSI) simultaneously. At an elaborate ceremony in Abuja, the Corporation was presented with the three certificates by the British High Commissioner to Nigeria who was represented by the Lead Trade Adviser for Education Sector Opportunities, Ms. Natasha Anjekwu. The three certifications achieved by NDIC are on Information Security Management System ISO/IEC 27001:2013, IT Service Management System ISO/IEC 200001:2011 and Business Continuity Management System ISO22301:2012.

Expressing her delight at the development, the National Coordinator/CEO SERVICOM Office in the Presidency, Mrs NnennaAkajameli lauded the NDIC for the feat. The SERVICOM boss, who was present at the event, urged the Corporation to view the certifications as its most valuable assets which should spur it to greater performance.

Akjameli concluded by stating that the SERVICOM Office intended to project the NDIC as a model to other public institutions in its efforts to optimise service delivery among public institutions in Nigeria.
Earlier, in her own remarks, Ms. Natasha Anjekwu described the feat as a great achievement. She said NDIC’s fulfilment of the requirement for the certification bore eloquent testimony to its adherence to international best practice in its operations. Also speaking at the event, the Director of Home Finance in the Federal Ministry of Finance, Mrs Olubunmi Siyanbola, who represented the Minister, also lauded the Corporation and urged it to view the development as a spur towards achieving greater heights.

Responding, the Managing Director/Chief Executive of the NDIC Umaru Ibrahim reiterated the commitment of the Corporation to lead in addressing the challenges of the financial services industry in Nigeria with a view to engendering professionalism and accountability. While expressing his delight at the emergence of the Corporation as the first public institution in the country to be certified with the three standards at once, the NDIC Boss added that the feat was consistent with the implementation of its renewable 5-year strategic plan, and its desire to be the best deposit insurer in the world by 2020. He promised that the Corporation would not rest on its oars in maintaining the standard it has set for itself.

By these achievements, the Corporation is poised to enhance the level of its operational readiness to deliver on its core mandate while continuously improving on the service delivery to meet the expectations of its stakeholders through sound information security, efficient IT management system and a robust business continuity system.

Amongst others, there would be improved information deliverables, availability and efficient services, effective communication as well as sound internal processes that would further engender public confidence in the banking system which would deepen financial system stability.