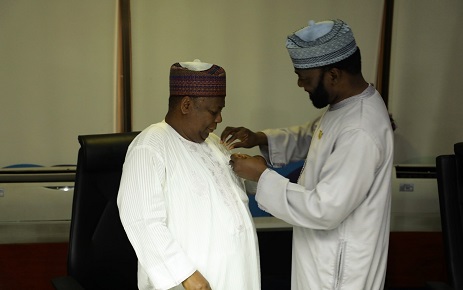 The MD/CE of the Nigeria Deposit Insurance Corporation (NDIC), Umaru Ibrahim, has called for close partnership and collaboration with Alumni Association of the National Institute (AANI) for the rapid economic development of the country.

The NDIC Boss made the statement while receiving the Alumni Association of the Institute which paid a courtesy visit on him at the Head Office of the Corporation on Tuesday, 10th of March, 2020. He disclosed that the Corporation was established in 1989 to promote public confidence in the banking industry; contribute to the stability of the financial system, as well as ensure an orderly resolution of failed financial institutions.

The NDIC’s CE disclosed that presently about40% of Nigerians are either financial excluded or operate outside the formal financial system. He therefore urged the Association to partner with the Corporation to accelerate the pace of financial literacy and financial inclusion among the Nigerian public. He disclosed that the Corporation, in close collaboration with the Central Bank (CBN), will continue to support the introduction of affordable products and services not only to the general public, but also to vulnerable women and dwellers in rural communities.

In furtherance of its elaborate initiatives towards achieving the desired level of Financial Inclusion in the country, the NDIC Boss expressed the commitment of the Corporation to support the introduction of new channels of providing financial services such as Agency Banking, Payments Service Banks, and mobile banking among others which will enable small depositors have access to financial services across the Country. In that respect, he called on the general public, especially retired senior public servants and retired bankers to acquire Agency Banking and MFB licences in order to make modest contributionsto the growth and promotion of these services in their respective communities. 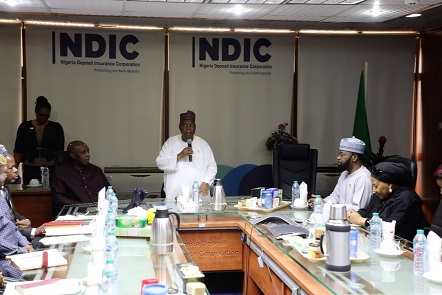 In the press statement endorsed by Sunday Oluyemi, Director, Communication & Public Affairs of the corporation saying Reacting to the welcome address, the AANI’s President and former Inspector General of Police, Mohammed Dikko Abubakar, disclosed that the purpose of the curtsey call was to identify with the way the MD/CE, Umaru Ibrahim, who is also an alumni of the National Institute, had piloted the affairs of the Corporation since his appointment. He eulogised the MD/CE for the remarkable strides the Corporation had made under his exemplary leadership.

He concluded his remarks by assuring the MD/CE that the Association will heed his call and is ready to partner with the NDIC to sensitize its members on the importance of financial inclusion to achieve its goals for the rapid socio-economic development of the country.