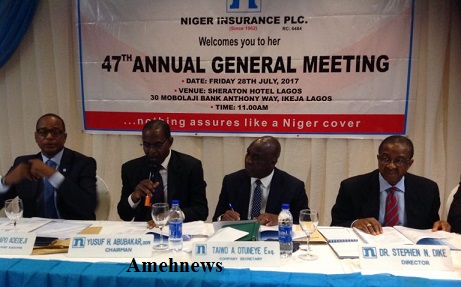 The groups total assets increased by seven percent to N22.5 billion against lost position of N20.9 billion recorded of 2015.

Operating profit as well recorded N99.04 million per cent compared to loss of N736 million recorded in the comparable period of 2015 while Net operating profit after tax equally recorded N42.1 million against loss position of N600.9 million written in 2015.

Addressing shareholders at the 47 annual general meeting of the company  held today in Lagos, the Chairman of the board, Yusuf Abubakar noted that in spite of the harsh economic environment, the company recorded an improved performance.

He assured the shareholders that the firm’s was relying on its robust asset base and diversified product portfolio to overcome all odds.

Abubakar equally assured the shareholders of the management team resolve to grow the business. ” I also have confidence on the quality of our management team and the support of our stakeholders that gives us strength and resilience to navigate uncertainty in our operations”, he said.

Also speaking at the meeting, the Managing Director/CEO of the firm, kolapo Adedeji stated ” In spite of winds that characterized the operating environment up to the third quarter of the year, the company is moderately stronger with an asset base of N21.9 billion against the prior year figures of N20.4 billion, representing 7.4 per cent growth”, he acclaimed.

NCC Refutes ‘Our Masts Do Not Pose Health Hazard’