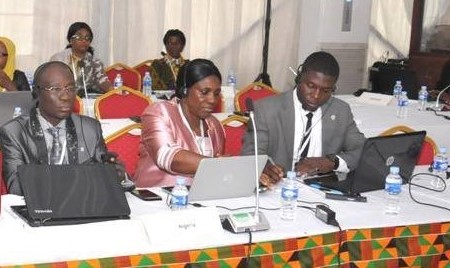 Nigeria has thrown its weight behind the global efforts to turn cocoa beans farming into an economically viable venture in the very near future.

To this end, the country has joined the clamour for sustainable and traceable cocoa farming as it participated actively with other stakeholders from cocoa producing Nations at the International Organization for Standardization (ISO) Technical Committee meetings held in Abidjan, Cote d’Ivoire recently.

The country was represented at the meeting by the Chairman, National Mirror Committee on Cocoa Mr. Shamsideen Olusegun Aroyeun from the Cocoa Research  Institute of Nigeria  (CRIN), Messrs. Margaret  Eshiett; Abdulkadir Jelani Abubakar and Benjamin Grace, all of Standards Organisation of Nigeria and JayeloaOlayinka of CRIN.

According to Mrs. Eshiett who was the leader of the Nigerian delegation to the meetings, ISO members from cocoa-producing Nations have been instrumental in the development of the current Draft ISO 34101 series of standards (Sustainable and traceable cocoa beans).

She stated that the draft ISO 34101 series of standards aim to specify requirements for a management system for the farming of cocoa beans, making production more sustainable.

The series according to her, will help to support the professionalism of cocoa farming around the world and support cocoa farmers to produce sustainably.

“When work is complete on the standards, it is believed that the use of the ISO 13401 series of standards will have a very valuable impact on the livelihoods of cocoa farmers and their families, because it will help them transform their farms into economically viable businesses” She said.