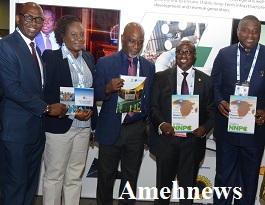 The Oil and Gas Industry is creating an enabling environment that would enable investors to contribute their quota towards making Nigeria’s abundant natural gas resources serve as launching pad for the nation’s industrialization take off.

Dr. Kachikwu, who was represented by Dr. Folashade Yemi-Esan, the Permanent Secretary in the Ministry of Petroleum Resources, said it was imperative for Nigeria to market its enormous gas resources at the global level because “we have to get our industries to work.”

The Minister noted that ideas, experience and lessons learnt from other countries at the conference would spur Nigeria to dismantle all obstacles which,over the years, have been slowing down the nation’s gas-to-power aspirations and industrialisation.

“Without power, we cannot have industrialization in our country. We are therefore committed to making the best use of what we have in terms of gas potentials and ensure that gas,indeed,drives the power sector,” Kachikwu stated.

On his part, Dr. Baru said NNPC was driving a number of initiatives which included collaborating with the National Assembly to address the fiscals; putting the required infrastructure in place as well as ensuring that new power plants are built.

“We are keen on using some of the new projects like the 614km Ajaokuta-Kaduna-Kano Gas Pipeline Project to open up not only the gas corridor but also ensure that power plants that are built can inject stability into the national grid,” Baru explained.

The GMD stated that as part of the new gas development initiatives, investors were expected to come in and establish fertilizer and petrochemical plants.

“On our part, we are keen on ensuring the sanctity of all our contracts. This, surely, will ultimately kick-start our industrial development,” he added.

Also speaking, the Chairman Senate Committee on Gas, Senator Bassey Albert Akpan,lauded the GMD for his support towards ensuring Nigeria’s successful outing at the conference, adding that engagements such as this would create the enabling environment for potential investors.

Chairman House Committee on Gas, Hon.Fredrick Agbedi,stated that the Senate and the House of Representatives were working together to ensure that in the next few weeks, the PIB becomes a law so that Nigerians will derive the maximum benefits, in especially,the Gas Sector.

The role of the Nigerian Liquefied Natural Gas (NLNG) is very critical in achieving the enormous potentials within the Gas Sector, as explained by the Managing Director of the company, Mr. Tony Attah.

Attah said as the biggest off-taker of gas nationwide, the company remained committed to safely producing its 22Metric Tonnes Per Annum (MTPA); bringing value to shareholders; growing capacity of staff in respect of Train 7 as well as keeping pace with the rest of the world.

In his remarks, the Director, Department of Petroleum Resources (DPR), Mr. Mordecai Ladan, said as a regulator, the Department would soon announce new ways of doing business in its areas of purview, stressing that gas domestication was keen to the Department’s agenda.

Ladan observed that now gas flare-out across the industry had reduced drastically from 12 per cent to 9 per cent.

“We are trying to make sure that companies come up with projects that will utilize the gas, and in turn, reduce gas flaring in the process.

In his remarks, the President of the Nigerian Gas Association (NGA), Mr. Dada Thomas, said renewables and natural gas complement each other, thus what the nation needed was a high energy mix, according to him.

“For Nigeria, gas is clearly the direction. We must all do our bit to attract foreign direct investment around our 192tcf proven gas reserves which we hope shall be translated into energy security, power generation and above all value addition for our teeming populace,”Thomas concluded.

Nigeria LNG to restart fifth unit in July after shutdown