…Highest Half Year Revenue Since Inception of the Command 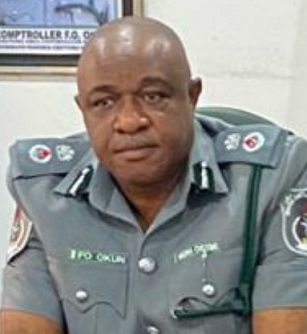 In a statement, the Command’s spokesperson, Mohammed Yakubu, noted that the figures collected for 2020 is the highest half year collection achieved by the command since its formal commissioning in August 18, 2006 by former President Olusegun Obasanjo as the country’s first privately built Roll on Roll off(RoRo) port for vehicles in the country.

The collected figure exceeded what was realised last year same period by a total of N12,112,709,437 which ,according to him, translates to 12 percent increase.

A statement by Yakubu attributed the increase in revenue collection to high volume of trade and due diligence of the command’s operatives under strict supervision of the Customs Area Controller, Comptroller Festus Okun.

He added that Okun has put increased supervision machinery in place, ensuring that officers were fully on ground before and during the outbreak of the Covid19 pandemic while observing all laid down protocols as advised by the National Centre for Disease Control (NCDC) and relevant health institutions.

The CAC also reiterated his advice to car importers to avoid using neighbouring countries and smuggling vehicles through the land borders as the long arms of the law will always catch up with them.

Okun reassured that with flawless compliance in the areas of sincere declarations and prompt duty payments, cargoes can be exited from his command within 6hours .

Trade facilitation and ease of doing business without compromising national security and government revenue have also been areas of priority, he said.

A breakdown of the collection shows various degrees of percentage increase in 2020 figures above that of 2019 except for the month of April where a 15 percent shortfall was recorded in 2020 showing a collection below what was made in 2019.