Nigeria’s economic recovery stalled in the second quarter in spite of an improvement in oil production. A sharp decline in telecoms output explains a large part of the weakness in service-sector growth. This should ease in 2H while higher oil revenue may help the construction and real estate sectors to recover. As a result, Bloomberg Intelligence Economics still expects the economy to expand by 1-1.5% in 2017 as a whole, but the trajectory of the telecoms industry will be the wild card for second-half growth.

Nigeria’s real GDP rose by 0.55% year-over-year in 2Q, missing the median forecast of economists of 1.3% in a Bloomberg News survey. Part of the shortfall can be explained by a revision to 1Q growth to -0.91% from -0.52% previously, largely because of a downward adjustment to oil and gas GDP in the quarter. A seasonal adjustment by BI Economics showed the economy expanding by 0.7% quarter-over-quarter in 2Q, but this was almost entirely because of higher oil output with the non-oil sector flatlining. 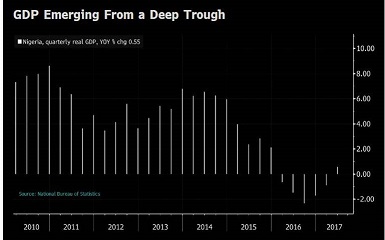 The service sector actually shrank 0.8% in 2Q, raising doubts about to what extent the economy is recovering beyond the increase in oil output. The poor service sector performance largely reflected a sizable contraction (-2.9%) in the telecom sector, which constitutes around 9% of total services GDP. Telecoms had previously shown more resilience to the sharp drop in oil revenue since mid-2015 than other sub-sectors in the category. 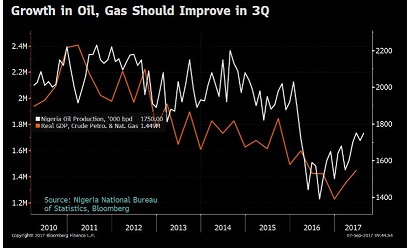 It’s unclear to what extent this collapse in telecom output in 2Q is related to regulatory efforts to deactivate improperly registered mobile phone users, partly due to security concerns. MTN Group Ltd., Africa’s largest mobile-network operator by sales, removed about 7-8 million subscribers that weren’t considered active. It remains to be seen to what extent these removals continued in 3Q or how it will affect telecom revenue during the quarter. Excluding telecoms, service-sector growth was still negative in 2Q, albeit not on a deteriorating trend. 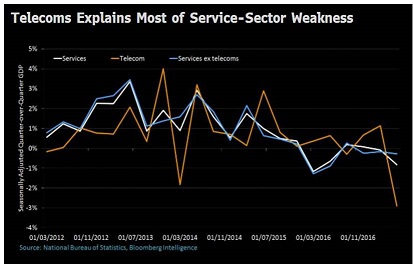 A recovery in telecoms output may boost service-sector growth in 2H. The real estate and constructions industries could also support growth. The two sectors combined account for about 11% of current GDP and as such have a larger direct impact on real GDP growth than the crude petroleum and natural gas sector. As in most petro-economies, oil revenue is a driver of the local property market and a recovery in crude output may thus help both sectors find a floor in 2H. 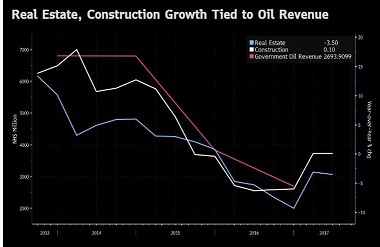 The downward revision of 1Q output and the weak 2Q reading may dampen the consensus forecast centered on expansion of 1.1% in 2017. However, a recovery in crude petroleum growth, in line with the estimates of higher oil output in July and August, should help to regain much of the lost ground in 1H. This means that Nigeria’s economy may still expand by 1-1.5% in 2017 as a whole, although the trajectory of the telecom sector will be a defining factor in the second half of the year.