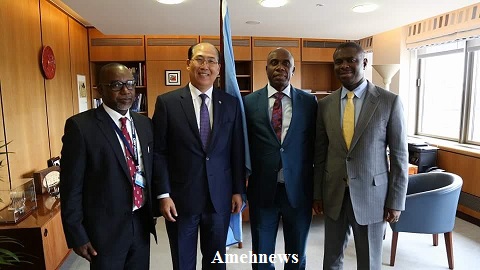 Nigeria’s chances of returning to the council of the International Maritime Organization (IMO), has greatly improved with the recent efforts of the management of the Nigerian Maritime Administration led by the Director General, Dr. Dakuku Peterside, to bring the country back to leadership position in global maritime community latter this year, Nigeria’s Alternate Permanent Representative (APR) at the IMO, Diko Balla has said.

Balla who stated this while speaking at the Nigerian IMO office in London, noted that the steps taken by the present NIMASA management, has led to a great improvement of the country’s relationship with the IMO as a body and other Maritime Administrations who are members of the international body. The move is in line with President Muhammadu Buhari drive to integrate the nation back into global affairs.

He noted that “Nigeria was amongst the first ten (10) countries from the over 170 member nations of the IMO to submit itself for the IMO Member States Audit Scheme, IMSAS, this is seen as a show of direction of the current administration of maritime in Nigeria by the IMO, adding that the IMO Secretary General Mr Kitack Lim was pleased when the Minister of Transportation Honorable Rotimi Amaechi informed him that the findings and observations of the IMO Member States Audit Scheme of Nigeria was being studied with a view to preparing and implementing Corrective Action Plans (CAPs) within the stipulated time frame”.

Speaking further, the APR noted that IMO considers the issue of Piracy as top priority and that the maritime community, particularly the IMO is pleased with Nigeria for taking the fight against Piracy and robbery at sea to new levels with the Anti-Piracy bill push parliament.

In his words “The achievements of the Dr. Dakuku Peterside led Management at NIMASA in the past one year is an indication that the nation’s maritime sector is heading in the right direction.  And the fact that the IMO is collaborating with Nigeria much more in the area of trainings and technical support shows that the international body is satisfied with NIMASA operations in recent times. By November this year, I can assure you that Nigeria’s election into the Category “C” at IMO will be an overwhelming one.”

Commenting on the implementation of the International Ships and Ports facility Security ISPS Code, Mr. Bala noted that the fact that Nigeria is now in the category of countries considered as most successful in its implementation is a welcome development to both the IMO and other stakeholders in the maritime sector.

” You will recall that when we lost our seat in Council in 2011, our implementation status was less than 13%. Today we have over 85% compliance level, so you can see that the international community is watching and appreciating our efforts” he said.

Speaking further, the Nigerian APR said that the IMO is prepared to support Maritime Administrations in Africa in combating security challenges, and in building human capacity equipped to implement, monitor and enforce international instruments.

Commenting on the recent conference of Association of African Maritime Administration AAMA,which was hosted by Nigeria, Mr Bala noted that the IMO has restated her commitment to support, when possible, regular meetings of Heads of Maritime Administrations in Africa, at frequencies to be determined by the continental body.

The Nigerian Alternate Permanent Representative to the IMO noted that the Body is satisfied with the decision of the continental body to encourage regional cooperation and coordination amongst member nations to enhance information sharing and regulatory governance among members which according to the IMO has the potentials to assist in combating the menace of piracy and other maritime crimes while maintaining a balance between security and the facilitation of global trade.

It would be recalled that all member countries of the Association of African Maritime Administration at their 3rd conference which took place in Abuja recently, agreed to address the challenges of building human capacities in the maritime sector, by developing an integrated human resources strategy to support the provision of skills taking into account gender balance in the entire maritime value chain which includes shipping and logistics, offshore activities, fishing, tourism and recreation, as well as safety and security.

Ignore rumours, “Nothing unpleasant has happened” to Buhari – Presidency