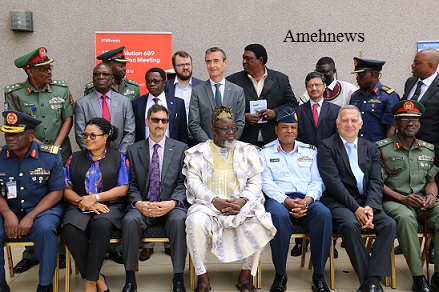 According to the Minister of Communications, Dr. Adebayo Shittu, the event which is the first-ever meeting of its kind, on African soil was lobbied by the Ministry of communications via the Nigeria Communication Satelite (NIGCOMSAT Ltd), during the 2016 consultative meeting which took place in Netherland to grant Africa and Nigeria the hosting right of the Meeting.

Addressing world delegates at the opening ceremony of the meeting, Dr. Shittu said the event would afford them the opportunity to interact with Nigeria’s administration, and facility tour to Nigerian communications satellite ground station to have first-hand knowledge of the company’s capacity and capability, including a Navigation Overlay Service (NOS) System, and Nigerian Satellite Augmentation System (NSAS).

According to him, “We are fully in support of backup satellite systems for NIGCOMSAT’S robust service delivery, continuity and expansion in areas and sectors that cover broadcasting, navigation, telecommunications services.

Dr.  Shittu disclosed that the Ministry of Communications is facilitating universal, ubiquitous and cost-effective access to communications throughout the nation as well as leveraging ICT for national development through specific policy targets, objectives, and priorities in thematic areas of ICT”.

“Critical infrastructure protection has received special attention in recent changes to national investment policies in Nigeria. It is our pledge to sustain the industry and surpass our contribution to the Gross Domestic Product (GDP) in line with the change agenda of President Muhammadu Buhari” he said.

He maintained that economies increasingly become dependent on ICT which is why the government is keen and working closely with industry players and development partners to maximize the value of digital innovations for national growth.

Dr. Shittu further disclosed that the Federal Government, shall in collaboration with her partners, commence test-based trials, characterization and pilot demonstration by the first quarter of 2019, using selected Nigerian Air Force Aircrafts and Validation by Agency for Aerial Navigation in Africa and Madagascar (ASECNA) before deployment in the civil aviation sector.

In an address, the Permanent Secretary of the Ministry, Mrs. Nkechi Ejele represented by Dr. Patrick Oguhma, reiterated how proud she was for Africa, specifically Nigeria to host the first ever International Telecommunication Union (ITU) Resolution 609 Consultation Meeting since its inception in 2003 in Geneva.

She said, “Everyone should agree that the equivalent power flux density level produced by all Radio Navigation Satellite Service System does not exceed the level of protection of Aeronautical Radio Navigation Service (ARNS) system”. Also, that “The Nigerian Communications Satellite 1R (NIGCOMSAT 1R) has L-Band transponder for navigation overlay services as Africa’s first contribution to Satellite – Based Augmentation System (SBAS)” Ejele said.

She added that the government of Nigeria will support the lofty and noble cause of the Nigerian Communications Satellite Limited for its navigation overlay service in order to bridge the gap for effective and diversification of the economy.

Earlier, the Chief of Air Staff, Air Marshal Sadique Abubakar thanked the Ministry of Communications and the Management of NIGCOMSAT for providing an enabling environment for the Nigerian Airforce to carry out its day to day operations in the aviation sector.

He expressed his delight to the Ministry for collaborating with the Nigerian Airforce to enable them to mobilize all the available expertise which has added value to the activities of NAF and for effective security of the country.

Kindly Share This Story: 5G when fully deployed will provide increased speed and bandwidth as…