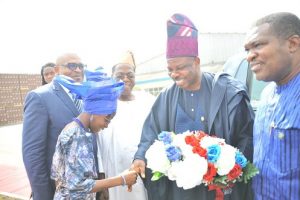 L-R: Governor Ibikunle Amosun of Ogun State receiving a bouquet of flowers as he arrived for the commissioning of the upgraded  Ota Brewery on Wednesday. With him are the Chairman, Nigerian Breweries Plc, Chief Kola Jamodu (second left); Corporate Affairs Adviser, Nigerian Breweries Plc, Kufre Ekanem, (first from left) and Otunba Bimbo Ashiru, Ogun State Commissioner for Commerce and Industry.

While welcoming guests who included the governor of Ogun State, His Excellency, Senator Ibikunle Amosun, and former president, Chief Olusegun Obasanjo, Chief Kola Jamodu, Chairman, Nigerian Breweries Plc, explained that the multi-billion Naira PET line which currently boasts the best technology in the HEINEKEN world was installed to deepen availability of the non-alcoholic product portfolio of the company. He added that the modern Water Treatment Plant was constructed to ensure the continued excellent quality of the company’s brands while the Waste Water Treatment Plant further contributes to the success of its sustainability agenda of “Brewing a Better World”.

According to the chairman, “These investments, totaling over N11b stand out as a testimony to our corporate philosophy of Winning with Nigeria and they reflect our company’s bold confidence in Ogun State and Nigeria as an investment destination.” Chief Kola Jamodu also emphasized that the projects signpost the contribution of the company to the economic development of Ogun State which also play to another of its brewery in Ijebu Ode and many of the ancillary industries that the company supports.. 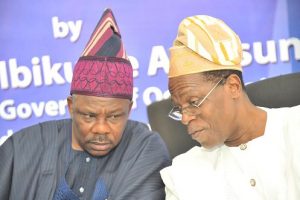 Oh his part, the Ogun State governor, Senator Ibikunle Amosun congratulated the company on the successful upgrade of the brewery which he described as an enviable step capable of facilitating a self-dependent economy. Governor Amosun commended Nigerian Breweries for its backward integration and local sourcing of over 50% of its raw materials and 95% of its packaging material. According to the governor, “It will be in our collective interest for companies in Ogun state and even the entire country to source their materials locally. Backward integration and import substitution is the master key to a self-sustaining economy”. He promised that the state will continue to provide necessary conditions for business to operate smoothly in the state. 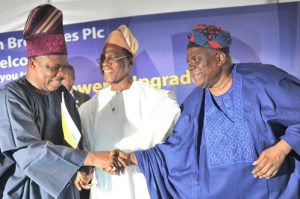 Former President Olusegun Obasanjo, represented by Chief Abraham Idowu Akanle congratulated Nigerian Breweries on the upgrade of the brewery. He described the private sector as the engine room of economic growth and called on other corporate organisations to follow the fruitful example of the company.

Nigerian Breweries Plc acquired Ota brewery in 2011 and since that time, the company has invested significantly to upgrade the facilities at the brewery to the world class standards befitting a brewery in the HEINEKEN group 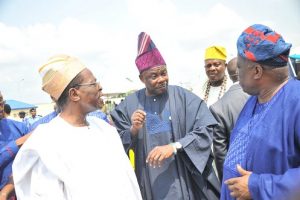