…….To pay cash dividend of N2.85k per unit of share holding 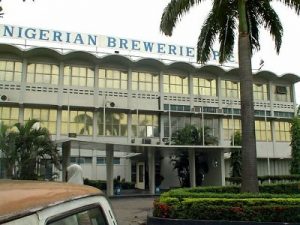 Meanwhile, the figures released by board of the Directors of the company to the investing public through the floor of the Nigerian stock exchange (NSE) contains nosedive figures N28,397 for profit after tax in the year under review in contrast to N38,049 in 2015,which shown a decline of N9652million representing 25.37 percent.

According to the trading statement from the Nigerian Stock Exchange over the weekend, the board of the Directors in the Company has closure of register for year ended December31, 2016, proposed a cash dividend of N2.58K per share unit to shareholders of the company subject to the approval of shareholders and stakeholders at annual general meetings (AGM) slated to holds on March3, 2017, if approved, the proposed cash dividend will be paid on March4, 2017, that is a day after AGM.

Similarly, the leading brewery in Nigeria, The Nigerian Breweries plc leads other nine stocks in the gainer chart for the period under review. NB opening price of the week was N115.00 while closing price stood at N130.00 leaving N15.00 as a gainer on the stock traded representing 13.04 percent change beating Guinness Nigeria plc to second position with opening price of N60.95 while closing price jump to N68.00 bring the gainer to N7.05, accounted for 11.57 percent change of the trading.

In the same vein: the overall traded data of the NSE for the week shown a total turnover of 765.656 million shares worth N9.717 billion in 12,468 deals were traded this week by investors on the floor of the Exchange in contrast to a total of 1.073 billion shares valued at N8.608 billion that exchanged hands last week in 14,486 deals.

While the Financial Services Industry (measured by volume) led the activity chart with 575.290 million shares valued at N3.470 billion traded in 6,738 deals; thus contributing 75.14% and 35.71% to the total equity turnover volume and value respectively leaving the Consumer Goods Industry behind with 53.812 million shares worth N3.470 billion in 2,572 deals.

The third position of the chart was occupied by Conglomerates Industry with a turnover of 48.961 million shares worth N229.411 million in 622 deals.

The traded data for the week under review shown the top three equities with highest volumes of shares traded as follows, Zenith International Bank Plc, AIICO Insurance Plc, and United Capital Plc which accounted for 280.563 million shares worth N1.867 billion in 2,438 deals, contributing 36.64% and 19.22% to the total equity turnover volume and value respectively.

Also, the NSE All-Share Index and Market Capitalization for the period under review appreciated by 0.34% to close the week at 25,250.37 and N8.739 trillion.