I am calling on everyone who has suffered from Arik Air’s sense of impunity, its inefficiency, and gross incompetence, to speak up now. We must collectively stop this situation.

I got information that my leader, mentor and the servant Leader, Asiwaju Bola Ahmed Tinubu was returning to Nigeria yesterday after weeks of vacation and business abroad. I was to be at the Nnamdi Azikwe international Airport, Abuja betweem 8 p.m. and 8:30 p.m. to welcome and honour the servant leader. Around 9 a.m., I sent one of my kids to the Lagos Airport to get me a flight ticket. He got the ticket and I was billed to check in by 2 p.m. as it was a 3 p.m. flight. I got to the Airport exactly by 2 p.m. and was there till about 10 p.m. when someone who recognised helped get a boarding pass. During my eight hour ordeal, I saw Arik Air’s unfortunate service firsthand. After collecting money, they abandon their passengers without shame. The management speaks to no one. They cancel flights without care. They have no system, no organisation and no sympathy. This is the story of a company that does not know how to manage success.

Arik Air has the highest number of aircrafts in Nigeria.

Arik Air knows how to collect money from passengers but does not know how to deliver efficient services.

Arik Air has no skills for managing its success.

Arik Air shows no remorse for its human rights abuses and abuse of office.

Now what do we do with Arik Air?

The Ministry of Transport and Aviation should investigate Arik Air. I understand that many petitions have been written about the avaition company and its less than desireable performance but the Federal Government has refused to pay attention. It is alleged that Arik Air cannot pay the debt it is owing aviation fuel suppliers; that Arik Air’s welfare of workers is nothing to write home about; that Arik Air’s workers are being owed months of salaries. And, many of the workers have been said ti have resigned and walked away. Arik Air seems to celebrate impunity as if enjoying immunity from the Federal Government. Given what I saw of Arik Air management yesterday, I think that time has come for the government to apply the big stick. This shame must not be tolerated any longer; something needs to give way.

I am calling on everyone who has suffered from Arik Air’s sense of impunity, its inefficiency, and gross incompetence, to speak up now. We must collectively stop this situation. Please share your experiences with Arik Air and let the world know. Arik Air must perform or stop operating; and the time is now was written by Joe igbokwe writes from Lagos 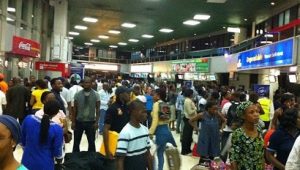 Arik Air keeps making its profit while jeopardising the plans of thousands of customers without any meaningful strategy to rectify the situation, and with no hint of compensation whatsoever.

In addition, there has recently been an uproar by passengers of Arik Airlines over delayed luggage on the London-Lagos route, forcing some to wait for over a week for their luggage. Plans have been ruined, financial losses incurred, and at least one case of a wedding disrupted due to undelivered items. Comical as some of the stories coming out of this may be, it is an extremely serious issue of ever-falling standards and exploitation of passengers by airlines. It is also an ongoing violation of aviation rules.

During the flight proper, several passengers, including the source who witnessed all of these, complained of cockroaches and other insects on the flight. Passengers were moved from their seats severally for varying reasons, one of which was the pacification of more than one husband and wife and parents and their children who had been split during the reallocation of seats due to the abrupt change to a smaller aircraft. The food was terrible, the flight attendants were very unprofessional, perhaps, caving under the pressure of having to deal with passengers who were visibly discontented.

The mood in the cabin throughout the flight was tense and passengers who demanded complaint forms were met with cold treatment by the attendants who grudgingly passed them out.