Nigeria’s economy, which in 2016 suffered its first full-year recession since 1987, will probably return to growth in 2017. Real GDP could expand 2-3% this year after contracting 1-2% in 2016. Oil output should rise after hitting a 27-year low in 2016 as militants attacked pipelines, while other sectors still struggle amid currency shortages. The weaker naira could spur investment, but high inflation will weigh on domestic demand. Agriculture may again prove the strongest sector of the economy.

Nigeria’s Economy Still Set to Emerge From Recession
Nigeria is still likely to exit recession this year despite contracting further in 4Q. The oil and agricultural sectors should help drive the recovery, while prospects for manufacturing and services appear more vulnerable due to an ongoing shortage of FX reserves and double-digit inflation. GDP in 4Q shrank 1.3% year-over-years, which reflected a continued, albeit easing, extractive-sector drag, while the non-oil segment faltered again. The economy appears to be improving, and is likely to grow in 2017. 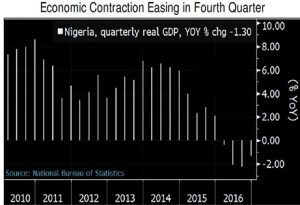 Nigeria’s current account has improved since dipping sharply in early 2015, according to government statistics. This reflects a deficit in the service and income accounts as domestic demand faltered.

A recovery in output from repairing pipelines knocked out by militant attacks in the Niger Delta should boost the current account further in 4Q16 and in 2017. But debt and equity inflows, which could finance imports, have yet to materialize following the naira’s depreciation in June.

Oil production accounts for 90% of Nigeria’s exports and the drop in global energy prices since mid-2014 is the main reason for a deterioration in the current account and recession. As such, higher prices as a result of OPEC production cuts should benefit the balance on Nigeria’s current account. 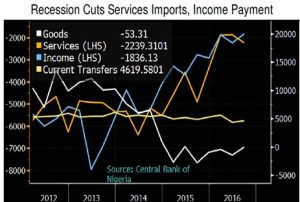 Nigerian inflation has slowed on a month-on-month basis since the devaluation of the naira in June, which may reflect the increased availability of foreign currency at the official exchange-rate. This led the year-over-year rate to ease in February, for the first time since October 2015, to 17.8% from an 11-year high of 18.7% in January.

Inflation should cool further in 1H, primarily because of slower food price growth. Nonetheless, average inflation in 2017 is likely to remain in double digits. 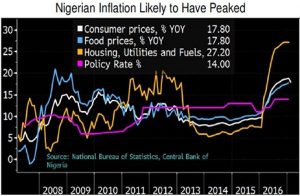 NSE DELISTED 85 COMPANIES IN 14 YEARS FROM ITS TRADING FLOOR