The coming of the Nigeria Maritime University was instrumental in bringing about peace and reconciliation in the Niger Delta following a period of fierce agitation for economic justice in the region. Delta State Governor, Dr. Ifeanyi Okowa, stated this in Asaba during a courtesy visit by Director-General of the Nigerian Maritime Administration and Safety Agency (NIMASA), Dr. Bashir Jamoh. 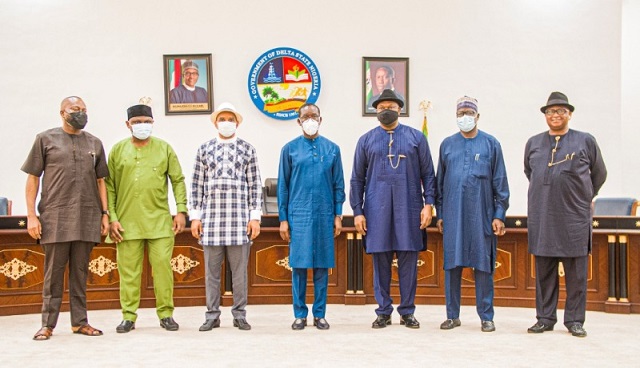 Okowa said the maritime university located at Okerenkoko, in Gbaramatu Kingdom of Delta State, which was established in 2017, with the active support of NIMASA, had a stabilising effect on the people.

“Indeed, the coming of the university gave birth to peace in the Niger Delta and we must appreciate NIMASA for its contribution,” Okowa stated. “I am glad that a lot is being done by NIMASA, particularly in Delta State, and we will continue to appreciate it so that you will continue to do more,” he added.

The governor pledged to cooperate with the maritime regulatory Agency in the building of a virile blue economy in the country, with a strong maritime business base in the state.

He said, “I am aware that we have been having issues with the ship repairs and building project and we will be happy to see this industry established to complement the university. 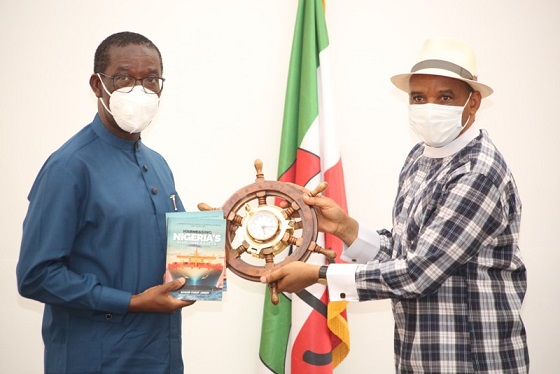 “We are aware that a lot of scholarships have been given to Deltans and I must register our appreciation to NIMASA.”

Jamoh and his Executive Management team were in the state as part of a sensitisation drive to get the buy-in of the coastal states in the current attempt to develop maritime as the pivot of the country’s economic diversification effort.

The Director-General stated, “It is my sincere pleasure to be with you as part of our stakeholders’ sensitisation in terms of the development of the maritime sector. We felt there should be a moral and political buy-in from everyone in the littoral states. The participation and support of the governments and people of the Niger Delta are key factors in the successful development of a robust blue economy in the country.

“Our maritime sector is a huge treasure trove of development opportunities. The sector can fetch us even much more than oil, as recent studies by experts, including the World Bank, have shown.

“As an agency of the Federal Government, and the maritime regulatory body of the country, we should be in the vanguard of this new move to get our critical stakeholders on board as we strive to wean Nigeria off oil dependence.” 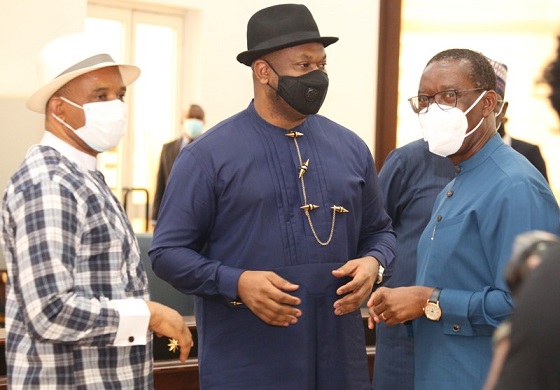 Jamoh stated that in the last seven years, the Agency had sited three major maritime projects in Delta State. They include the Nigeria Maritime University, Okerenkoko, the country’s first maritime university; the NIMASA Science and Technical College, Okoloba; and a proposed shipyard for ship repairs.

He disclosed that over a thousand Delta State indigenes had benefited from the Agency’s overseas scholarship scheme to study marine-related courses.

The DG called for more participation from the government and people of Delta State in the harnessing of the enormous maritime potential of the region. “Opportunities for profitable investment abound in shipbuilding, ship repairs, ship recycling, and shipping,” he said.

Jamoh was accompanied on the visit by the three Executive Directors: Victor Ochei (Maritime Labour and Cabotage Services), Shehu Ahmed (Operations), and Hon. Chudi Offodile (Finance and Administration). Special Assistant to the Director-General on Communications and Strategy, Mr. Ubong Essien, was also on the entourage.

Kindly Share This Story:Nigerian creative industry and social media “influencers” have resolved to increase their…