The Director General of the Nigerian Maritime Administration and Safety Agency (NIMASA), Dr. Dakuku Peterside has restated that the present Management is on course in its bid to reform, reposition, restructure and reorganise the Agency. 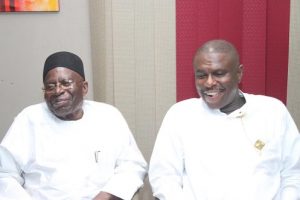 L-R: The Chairman Governing Board of NIMASA, Gen. Jonathan India Garba and The Director General of NIMASA Dr. Dakuku Peterside

Dr. Peterside made this assertion while briefing the Chairman of the NIMASA Governing Board, Gen. Jonathan India Garba (Rtd.) and other members of the Board in Port Harcourt during the familiarisation tour of the Governing Board of the Agency to the operational zones of NIMASA which commenced at the Eastern Zonal office of the Agency.

The DG stated that in spite of the minor challenges that come along with every change agenda, management of the Agency with support of the Governing board are committed to ensuring that NIMASA is repositioned to revitalise the economic enhancing activities of the maritime sector.

According to him, “NIMASA is the Agency of government charged with the responsibility of advancing the maritime sector by regulating shipping, promoting indigenous participation in shipping and ensuring that the ocean is clean and safe for shipping activities. The implications of these mandates are that we have responsibilities for maritime safety and security; seafarers’ standards; marine environment management; search and rescue, ship registration and an added responsibility for the Cabotage act that was passed in 2003”

The DG who noted that to effectively carry out the mandates of the agency, the present management looked into challenges that were facing it after establishing that the NIMASA workforce was not a problem but needed motivation.

He also said that NIMASA after establishment was still working under the defunct structures of the Joint Maritime Labour Industrial Council (JOMALIC) and the National Maritime Authority (NMA) that were merged to form the Agency in 2007 which was due for a change and this led the present management to adopt a Medium Term Strategic Plan which has aided steps of repositioning the Agency for better service delivery.

In his words, “our principal mandate is to restructure, reposition, reorganise and reform NIMASA and make it a foremost Maritime Administration in Africa because we have no reason not to be number one in Africa. Of every 100 cargo heading to Africa 65 would come to Nigeria and in this regard we must ensure that our maritime sector remains vibrant”

Dr Dakuku highlighted that bold steps had been taken to automate the processes of NIMASA and make the zones semi-autonomous by devolving powers to them in order for stakeholders to conclude every transaction at the zonal level. The zones have also been upgraded as Directors now head the zones.

In his response, Gen. Garba assured the Executive Management of the Governing Board’s support, stating that the Board will use its will to ensure that NIMASA becomes a major maritime voice in global shipping.

It would be recalled that in line with the restructuring and repositioning Agenda of the Agency, the Board recently approved the promotion of over 300 staff members to the next grade level to motivate them and increase their degrees of productivity.