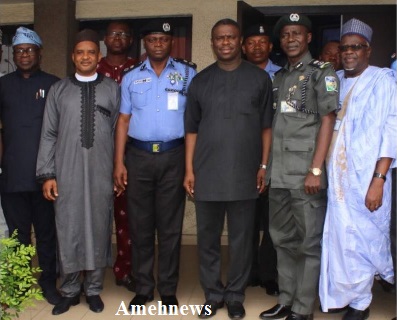 The DG stated this while receiving a delegation of the Police Force, Maritime Command led by the Commissioner of the Command, CP David Folawiyo who paid him a courtesy visit at the Nigerian Maritime Resource Development Centre (NMRDC), Lagos.

He noted that the Police Officers’ first order of business was to serve and protect; and that as an Agency of the government of Nigeria, whose mandates include ensuring safety of the Nigerian’s waterways, NIMASA places premium on security and all legal Agencies and instruments that facilitate and complement delivery of these mandates.

According to the DG, “let me commend you for what is in the offing to improve the nation’s maritime sector, particularly your plan to provide morepolice personnel to secure our waterways. We are impressed for the plans you have put in place to complement our efforts in ensuring that our maritime domain is safe for maritime and shipping activities to thrive. We are opened to partnership and collaboration, especially with the Nigerian Police Force”.

He observed that security has a wide implication for the maritime sector and that NIMASA is taking the issue of Maritime securityseriously in line with the global industry benchmark and standard, particularly the International Ships and Ports Facility security (ISPS) Code to enhance growth and regional stability.

Speaking further, Dr. Peterside commended the delegation and the entire Maritime Command of the Police Force, noting that a symbiotic relationship between NIMASA and other institutions of government in Nigeria was necessary to guarantee safety and security of our Maritime corridor, hence further promote ease of doing business in the country, in line with the Presidential Enabling Business Environment Council (PEBEC).

Speaking, the Police Commissioner, Maritime Command, CP David Folawiyo noted that his command was in NIMASA to fraternize with the Agency for its achievements since the assumption of Dr. Peterside as Director General; and to also chart a path of possible partnership and collaboration as well as inform the Agency of the Command’s plans and activities.

He noted that a strong cogent relationship between NIMASA and the Nigerian Police Force was necessary to ensure a safe and secure maritime environment and that his team was ready to support the Agency to realize it enabling mandates.

According to CP Folawiyo, “We are planning to bring in two helicopters to provide aerial surveillance of our maritime domain; and we are also seeking the approval of government to establish the Western and Eastern Maritime Zone to ensure effective policing and we know that this visit to NIMASA is a step in the right direction”.

It would be recalled that NIMASA recently renewed its MoU with the Nigerian Navy and also received the Federal Executive Council’s approval for acquisition of some Fast Intervention Vessels, which are all aimed to improve and foster security of the Nigeria’s territorial waters for safe and secure shipping.

WHY OSUN PEOPLE ARE EXCITED IN GOLDBERG EMPOWERS YOUNG ENTERPRENEURS?