………. Maritime Ready to Take over From Oil says Peterside

The Director General of the Nigerian Maritime Administration and Safety Agency (NIMASA), Dr. Dakuku Peterside, has urged the media, especially the maritime press to support the government’s drive to diversify the economy for growth and create alternative opportunities for investments 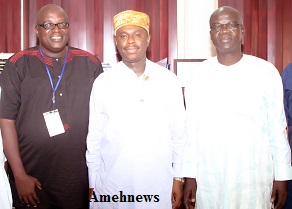 The NIMASA DG stated this while receiving the leadership of the Nigerian Union of Journalists (NUJ) led by its National President, Abdulwaheed Odusile, at the Agency’s headquarters in Lagos.

Dr. Peterside while noting that the media is the interface between the public and the Government, urged them to be professional in their reporting as people look up to them as the major source of information especially as the Government seeks to diversify the economy from oil.

“We urge you to support the Government as it diversifies the economy for a better future for the entire Nigerian populace. You have to be fair and professional while reporting Government activities in order not to create unnecessary panic amongst the public”, the NIMASA boss said.

He stated that the maritime industry is ready to take over from oil as the leading revenue earner in the country and called on all stakeholders to look into the opportunity that abound in the sector.

Dr. Peterside said “the ocean is a resource a country can leverage on to grow its economy and blessed with a coastline of about 853km and 250 nautical mile Exclusive Economic zone, we must begin to take advantage of the maritime opportunities available to us to grow our economy”.

Earlier in his address,  Abdulwaheed Odusile, who had on his entourage the Chairman of the Lagos branch of the NUJ, Deji Elumoye said that his colleagues will do more to focus on Government activities geared towards revamping the economy, especially at agencies such as NIMASA that are in the frontline of driving the diversification process. He noted that this will help ensure a virile maritime industry and by extension a greater Nigerian economy.

Being the Designated Authority (DA) for the implementation of the International Ship and Port Facility Security (ISPS) code in Nigeria, NIMASA has implemented policies which has led to enhanced security awareness in the Ports, terminals and jetties which has improved economic activities in these facilities. The Agency has received commendations from national and international bodies including United States Coasts Guard (USCG) for its progress in the ISPS code implementation. 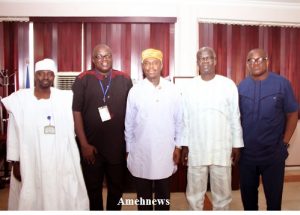 Delay in listing, MTN shares in 2017 will affect NSE – experts