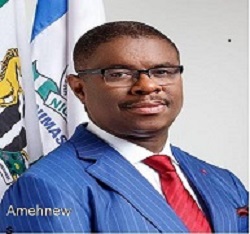 The Director General, NIMASA, Dr. Dakuku Peterside
The facilities are Heyden Petroleum Jetty Ijora Lagos; Waziri Jetty, Dockyard Road Apapa Lagos and Starz Marine Shipyard Limited Onne in Rivers State.
All three facilities have already taken steps towards complying with the provisions of the code and also provided commitments in writing to the Agency to remedy the lapses that led to the initial closure within the shortest time possible.
The reopening of these facilities is in line with the Management’s commitment to create the enabling environment for businesses to thrive in the maritime industry in line with global best practices.
According to the Director General, Dr. Dakuku Peterside, “we want to facilitate business growth in the sector and not to stifle it. The facilities have been reopened because of the steps already taken and the commitment given by the owners. NIMASA will however not hesitate to sanction these and any other facilities that contravene the provisions of the ISPS code which we have resolved to fully implement in Nigeria”.
In a press statement released by Hajia Lami Tumaka, Head, Corporate Communications of the agency said in order to guarantee the safety of ships and port facilities in the country, NIMASA as the Designated Authority (DA) for the implementation of the ISPS code has made it a continuous exercise of monitoring the compliance level of all facilities so that non compliant ones do not jeopardise security in the sector.
The three facilities earlier shut were in exercise of the Agency’s powers in line with the provisions of Part VIII of the ISPS Code Implementation Regulations 2014 under which the facilities were adjudged to be non-compliant despite repeated warnings to remedy the deficiencies.