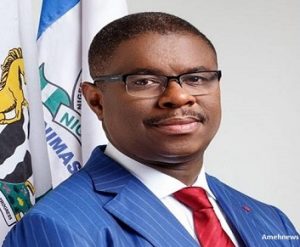 The Director General of the Nigerian Maritime Administration and Safety Agency (NIMASA) Dr. Dakuku Peterside has called on Maritime stakeholders to make input in the ongoing Port Reform Agenda of the present administration in other to reposition the maritime industry for greater efficiency.

Peterside made this call recently in Lagos when he played host to a delegation of the Editorial Board of the Nation Newspaper led by its Chairman  Sam Omatseye and the chief strategist of Epsilon Limited Amechi Chukwujama who came to brief him on preparation for a proposed port reforms conference in conjunction with the Federal Ministry of Transportation.

The Director General said there is the need to harness a synergy of ideas from all stakeholders towards ensuring a very user friendly port system that will be a model in the sub-region.  He added that the need for seamless transaction at the ports cannot be over emphasized.

He asserted that the proposed conference would help reposition the Maritime Sector for the realization of the change Agenda of the President Muhammadu Buhari led Administration.

The Executive Director (Finance and Administration) Bashir Yusuf Jamoh in his contribution made a case for the inclusion of the railways in the intended ports reform in order to decongest the roads.

Fashakin Rotimi Joseph (Executive Director Operations) on his part commended the Nation Newspaper for conceiving and proposing this conference which is expected to create awareness and set acceptable standards for port operations in Nigeria.

The leader of the delegation Omatseye informed the NIMASA management that the Port Reform Conference is intended to bring together all agencies connected with Port Administration to create a seamless business environment through an acceptable template with defined timelines.

Chukwujama told the NIMASA Management that though a number of positive developments have been recorded in the Maritime Sector since 2006, there was still room for improvement. He maintain that the forum was geared towards President Muhammadu Buhari’s quest for accelerated economic growth through increased revenue and job creation.

The conference is billed to hold on March 30, 2017 at the Civic Centre, Victoria Island, Lagos, with the theme “Making Nigerian Sea Ports World Class.”

Kindly Share This Story: To restructure business strategy; To diversify into asset-light business models; To…

Manufacturers Association of Nigeria Solicits for 5% interest rate for manufacturers