The Nigeria Maritime Administration and Safety Agency (NIMASA) may have plan not to put floating dock in use since it was acquired and delivered sometime ago which is presently rots away on Nigeria waters after 10 months delivery. 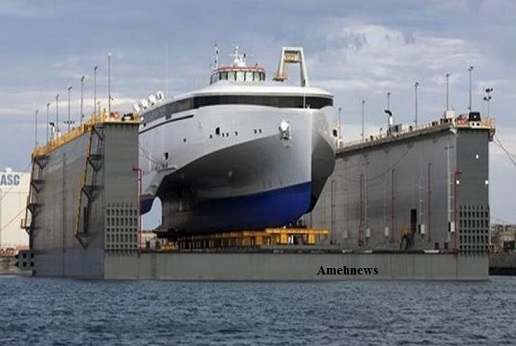 If the multi-million Dollar floating Dock was meant to set the stage for the agency to assist the Federal Government and the ship industry stakeholders, the opportunity of saving the much needed hard currency said the Nimasa. Why then. the said floating dock after 10 months of received by Nimasa, the vessel is still lying idle without put it to use with the maintenance allegedly costing about N3.6 million daily, which is N100 million monthly and for the 10 months that not in used will running N1billion without any economic benefit to the nation.

Amehnews recall that NIMASA received the delivery of the floating dock on June 12, 2018 in Lagos which was put at cost of N50 billion that meant to help boost ship repair capacity, generate wealth and create employment for Nigerians.

Although the International Maritime Organization (IMO), requires that every ship that trades internationally must be in class by being dry docked to ensure seaworthiness of the ship’s.

According to the standard of IMO, most ships are required to be dry docked twice every five years. Some ships may have dry docking postponed or the intermediate dry docking waived by performing an underwater Inspection in Lieu of Dry docking (UWILD).

In fact every country that owns ships or receives ships to its shores usually sees ownership of dry docks as a necessity. In fact no country can truly be called a maritime nation without a vibrant ship repair and shipbuilding industry.

However stakeholders have lamented on the sad state of the country’s floating dock which has the potential of generating about N17 billion annually for the country if effectively put to work.

A Stakeholder has expressed the fear that the floating dock May soon turn out to become another white elephant project.

The source disclosed that the country, as a matter of fact, is losing about N16.5 billion ($100 million) annually to neighbouring countries through the movement of its vessels for dry docking, to meet the IMO requirement.

“With an average of 5,000 ships calling at the Nigerian ports annually, 400 active coastal vessels and several fishing trawlers, the demand for ship repair and maintenance facilities can only be on the rise.”

Speaking in the same vein, another stakeholder, a revered freight forwarder also accused the Director General of NIMASA Dr. Dakuku Petersides of frustrating efforts to put the floating dock to work, alleging that he must have other reasons for keeping it idle.

A stakeholder while pleading for anonymity also said: “I have my fears that the DG may definitely be getting a satisfaction on the daily maintenance cost of the project, if not, why should it take him so long before ensuring the floating dock is put to work?

“I learnt that several recommendations have been made to him (Dakuku Peterside) even by a committee set up by NIMASA itself, but he has refused to hearken to any, or act on it.

“Stakeholders have lost confidence in his style of administration. We will not fold our hands and watch Dakuku further ruin the Maritime Industry, just because of his inability to capture wasting economic opportunities”, he posited, explaining that there is presently “a secret meeting of stakeholders in the industry; and very soon we will publicly pass a vote of no confidence on Dakuku. We are already gathering signatures!”

“This man must not return for second term with Buhari, we won’t allow that”, he highlighted further.

To response to above statements, when contacted, the Nimasa’ spokesman, Isichei Osamgbei refused to comment on the issue as at the time of filling this report.

Kindly Share This Story: As Agency Unveils Guidelines for Terminals, Jetties.   In line with…