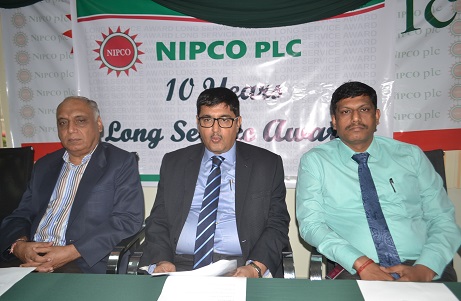 Nipco Plc, an indigenous integrated oil and gas company started operations at its state- of –the- art terminal in Apapa Lagos in 2004 and has since remained a consistent and significant player in the industry. It was in recognition of its assiduous contribution that she was deservedly granted the status of Major Marketer in 2013.

Situated on Dockyard Road ,Apapa on a land approximately 10 hectares ,her primary role at inception was to participate in the distribution of white Petroleum Products business across Nigeria to enable fuel marketers’ better access to the products and ultimately grow their business. She has since diversified into other areas in the industry such as the storage and distribution of Liquefied Petroleum Gas [LPG] and Compressed Natural Gas [CNG].

The company has achieved giant strides in the oil and gas industry and also consistently built an impressive financial performance over the years. Terminal operations are fraught with challenges of product sourcing following the paucity of forex , jetty issues , sliding price of crude oil ,low level of capacity utilization resulting in general decline of revenue but the company has been able to soldier on over the years largely due to its purposeful leadership and committed labour force. In 2015, despite the initial signs of an impending downturn in the industry, it recorded a turnover of over N114bn.

NIPCO boasts of over 150 branded retail outlets across the country with a projection of over 200 by 2016. It has capacity to load over 200 trucks of white products on a 24hrs basis with a cumulative storage capacity of over 84million litres.

The company diversified into gas in 2009 with the commissioning of its LPG plant with a total storage facility of 4800MT. The company’s numerous skids with electronic filling machines which have continued to serve as reliable source of getting gas both for domestic and industrial users with premium placed on accurate filling. In order to promote LPG among the masses, Nipco PLC has ready stock of all LPG Accessories like the cylinders, burners, regulators and rubber hose which are sold at very competitive rates. The company currently handles the supply of about 40% of the entire LPG consumption in the country.

Nipco pioneered the construction of CNG stations in a JV Company -Green Gas Ltd [GGL] with Nigerian Gas Company [NGC], a subsidiary of Nigeria National Petroleum Corporation [NNPC], in Benin, Edo State with scores of others at various stages of completion across the country. The challenge of distribution of gas through pipelines to industries to power their machines has been addressed through the GGL giant compression plant at Ibafo, Ogun State So far, GGL has converted over 4,000 vehicles to use as Natural gas. Nipco has on several occasions stepped up her human capital development to boost its manpower in line with the local content development Act 2010 which harps on effective harnessing of indigenous capacity in the nations hydrocarbon industry.