The Management of the Nigeria Liquefied Natural Gas (NLNG) Limited stated that the firm is moving with its plan of developing Bonny – its host community – into Nigerian Dubai. 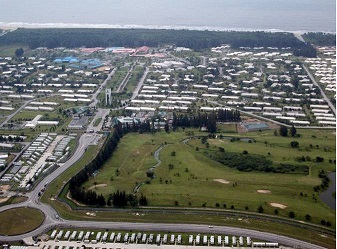 Tony Attah, the Managing Director of NLNG led the management, presented the 2017 facts and figures contains activities of the firm to reporters in Lagos yesterday said the 25-year development master plan expects Bonny to become mini-Dubai by 2040. Accenture Group is doing the thinking with NLNG on how to actualise the goal, he added.

Attah reiterated the need for the National Assembly not to proceed with the proposed amendment of the NLNG Act. According to him, such a step will cost Nigeria a lot of investments and jeopardise future investments by NLNG including Trains 7 and 8 expected to bring $25billion investment, increase the firm’s capacity from 22 million tonnes per annum (mtpa) to 30mtpa, create 18,000 jobs and push up domestic liquefied petroleum gas (LPG) supply capacity from 250 tonnes to 1.0mtpa.

Besides, he explained that the primary aim of the National Assembly to amend the NLNG Act, which was to compel the gas company to pay the Niger Delta Development Commission (NDDC) levy, does apply because NLNG does not produce gas. It only buys gas just like a fertiliser or petrochemical company, he added.

The NLNG management, it was learnt, has been meeting with the relevant committees of the National Assembly to explain these facts to them and also make them see the entire scenario from the same lens as the gas giant.

The financial performance of the NLNG Limited dipped last year on global low oil prices and heightened militant attacks in the Niger Delta.

While the fomrer started since late 2014, militant attacks peaked early last year resulting in bombing of pipelines including a major gas supplier to NLNG.

OUT OF THE BOX: Easter Holiday In the Eastern City On the Hill, By Majeed Dahiru