The Nigerian National Petroleum Corporation (NNPC and its investment partners, Shell, Total and ENI, have taken the Final Investment Decision (FID) to go ahead with the construction of Train 7 of the Nigeria Liquefied Natural Gas (NLNG). 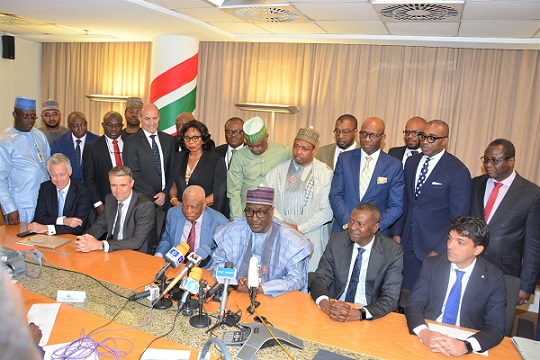 NNPC GMD, Mele Kyari (sitting 3rd right), making the announcement of the Final Investment Decision (FID) on the NLNG Train 7 taken by the Board of the Nigeria Liquefied Natural Gas (NLNG) in Abuja …Friday.

Announcing the development Friday at the NLNG Headquarters Annex in Abuja, a visibly elated NNPC Group Managing Director, Mele Kyari, said it was a great day for Nigeria as the NLNG Train 7 project would rake $20bn revenue into the Federal coffers and create 10,000 direct and 40,000 indirect jobs.

He said the FID was a vote of confidence in the Nigerian economy as a prime investment destination by the International Oil Companies.

“It also signifies that there is a renewed confidence by our international investors, particularly our partners who we have known for a long time, to still agree to put money back into this country to move this project forward”, Kyari stated.

Describing the FID as a desire met, the GMD said it would help open a floodgate of opportunities for more of such investments which could boost the economy and create prosperity for the over 200million Nigerians who are the shareholders of the corporation.

“We need to do more, and we can do more. This FID has opened the gateway for doing more great things. We will work with our partners to bring in more projects that will add value to this country in the Upstream, and particularly in the gas processing sector”, he said.

He thanked President Muhammadu Buhari for his unflinching support and expressed appreciation to the investment partners and the management of the NLNG for their tenacity in staying committed to the project in spite of all the challenges, adding that Mr. President’s earnest desire was to drive the NLNG to establish Train 12 as soon as possible.

Also speaking on the part of investors, the Managing Director of Shell who was represented by Mr. Henry Bristol, said Shell was committed to the project and the opportunities it provides for Nigeria.

On his part, the Managing Director of Total, Mr. Mike Sangster, said the company was very pleased to be part of the decision to proceed with the Train 7 which he described as great and fantastic.

The Managing Director of ENI who was represented by Mr. Peter Costello also expressed the commitment of his company for the decision to go ahead with the Train 7 project, adding that the decision was in tandem with the celebratory mood of the season.

It would be recalled that the GMD had, at various occasions in the year, committed to having the FID taken before the end of 2019.

The Train 7 would boost the production capacity of the current six-train NLNG by 35 per cent from 22Million Tonnes Per Annum (MTPA) to 30MTPA and increase its competitiveness in the global LNG market.

Also present at the event were the Chairman of the Board of NLNG, Chief O. R. LongJohn, Managing Director of NLNG, Mr. Tony Attah, and the NLNG General Counsel/Company Secretary, Mr. Akachukwu Nwokedi.