The Nigerian National Petroleum Corporation (NNPC) and its partners have taken a critical step towards meeting the October date fixed for taking the Final Investment Decision (FID) on the Train 7 of the Nigeria Liquefied Natural Gas (NLNG) by signing the Letter of Intent (LoI) for the project. 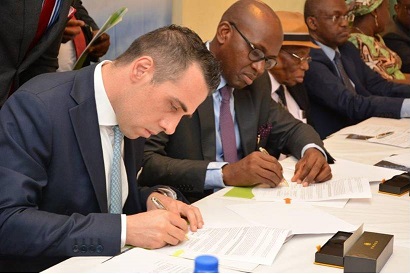 Managing Director of NLNG, Mr. Tony Attah, and representatives of some of the shareholders signing the Letter of Intent for the Train 7 Project …Wednesday in Abuja

The signing of the LoI which took place today in Abuja signifies the endorsement of a legally binding interim agreement outlining the main points of the Train 7 project by the shareholders which is mandatory before taking the FID.

Speaking at the event, Group Managing Director of the NNPC, Mallam Mele Kyari, afirmed that there was no going back on taking the FID in October, stressing that everything needed to be done was being done to make the FID a reality on the scheduled date.

The GMD who was represented by the corporation’s General Manager, New LNG, Engr. Ahmed Dikko, said the management of NNPC was very passionate about the project because it held the potential of boosting activities in the oil and gas sector and ultimately stimulating growth in the nation’s economy.

“Before us today, is the signing of the Letter of Intent (LoI) for the Train 7 project. By 31st October, 2019, we will all gather together again to sign the dotted lines for the Final Investment Decision (FID) of the Train 7 project. This is indeed the wish of NNPC as a shareholder, and I will like to reaffirm to you all our support to carry out all the realignment to make the project a reality”, the GMD stated.

He urged the other shareholders to start preparing for Trains 8, 9 and 10, while assuring the SCD Group, the consortium engaged for the Engineering, Procurement and Construction (EPC) of the Train 7 project, of the sustained support of NNPC towards the successful completion of the project.

Earlier, the Managing Director of NLNG, Engr. Tony Attah, said the Train 7 project was expected to increase the NLNG production capacity by 35 per cent from 22million tonnes per annum (MTPA) to around 30MTPA, adding that the project would attract Foreign Direct Investment of well over $10billion including the upstream scope of the LNG value chain.

“The project is anticipated to create about 10,000 new jobs during the construction stage and on completion, help to further diversify the revenue portfolio of the Federal Government and increase its tax base. This is in line with our corporate vision of ‘helping to build a better Nigeria’. The construction period after FID will last approximately four to five years,” Engr. Attah averred.

In his remarks, Minister of State for Petroleum Resources, Chief Timipre Sylva, who was represented by the Permanent Secretary of the Ministry, Dr. Folasahde Yemi-Esan, said the journey to the signing of the Letter of Intent (LOI) of the Train 7 project was a very long and tortuous one which has finally come to reality.

On his part, the Executive Secretary of the Nigerian Content Development and Monitoring Board (NCDMB), Engr. Simbi Wabote, urged the EPC contractor to abide by the local content requirements of the project.

The highpoint of the event was the signing of the dotted lines by NLNG and the SCD Group which won the competitive bidding for the project.

NLNG is owned by four shareholders namely: the Federal Government of Nigeria, represented by the Nigerian National Petroleum Corporation with 49 per cent; Shell Gas B.V with 25.6 per cent; Total Gaz Electricite Holdings France with 15 per cent; and ENI International N.A.N.V.S. ar.l with 10.4 per cent.