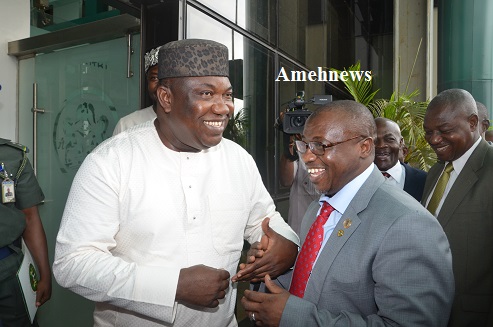 The Nigerian National Petroleum Corporation (NNPC) and the Enugu State Government have pledged to work together to revamp the strategic Enugu Depot towards meeting the petroleum products demand of the entire South-East region and beyond.

This was made known when the Group Managing Director of the Corporation, Dr. MaikantiBaru paid a courtesy call on the Enugu State Governor, Rt. Hon. IfeanyiUgwuanyi, at the Government House, Enugu on Thursday.

Dr. Baru who lamented the incessant acts of vandalism on the Aba-Enugu products pipeline said at some point, about 700 breaches were recorded on the pipeline, a situation that has hampered efficient supply and distribution of petroleum products not only in the state, but in the entire South-East region.

The GMD explained that even after the Aba-Enugu pipeline was repaired,it still had to be shut down as the corporation hardly gets up to 50% of the products pumped.

He described Enugu Depot as a major NNPC supply and distribution infrastructure in the entire South-East region which requires the support of all stakeholders bring back to life.

According to the GMD, the Osisioma and Nsirimo areas (both in Abia State) as well as Ishiagwu (in Ebonyi State) were the major vandalism flash points along the line where illegal connections for diversion of products had been observed almost on a daily basis.

He, therefore, called on the governor to rally his counterparts in the region to work with the NNPC and security agencies to secure the strategic pipeline, which he said would go a long way in reviving efficient supply and distribution of petroleum products in the area.

The GMD also charged the governor to collaborate with relevant government agencies to enforce the sale of petrol at  filling stations in the state at the government-regulated price of N145.

“You wouldn’t want to watch as unpatriotic marketers profiteer over your innocent citizens. We still believe marketers anywhere in this country can make profit selling at the official pump price,” Baru added.

Responding, Governor Ugwuanyi assured the GMD that he would rally other governors from the region to ensure that the Aba-Enugu pipeline is secured from the unwholesome activities of vandals.

Describing the GMD’s visit as timely, Governor Ugwuanyi said he was now better informed as to why the Enugu Depot was not in operation.

He assured that the Enugu State Task Force on Petroleum Products would work with NNPC officials and relevant security agencies to ascertain the exact incident spots with a view to securing the pipeline.

Kindly Share This Story:Italian Serie A and Premier League matches continue this weekend with GOtv…

TCN to Carry Out Routine Maintenance in Itire Transmission Substation