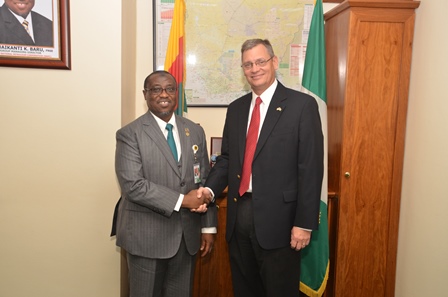 Speaking in Abuja after a meeting with a high-powered ExxonMobil delegation led by Mr. Jack Williams, Senior Vice-President of the United States-based global oil Corporation, Group Managing Director of NNPC, Dr. Maikanti Baru, said the joint venture with ExxonMobil, which until recently was the highest producer of crude oil in the country, was primed to make a rebound.

He said the Corporation had advanced talks with ExxonMobil on major operational issues like improved drilling to increase production and refurbishment of crude oil pipelines as well as supply of gas to the planned Qua Iboe Independent Power Plant among others.

“More importantly we also discussed their recommitment to supply gas to the domestic market and this is something that is very positive and they are willing; we would quickly roll-out the programme to ensure that sufficient gas comes in for the IPP. We also secured a commitment from them to end gas flare at QIT and other production areas,” he said.

Describing the meeting as very fruitful, Williams on his part noted that ExxonMobil was committed to growing its production in Nigeria ’’safely and with much integrity’’.

To underscore its aspiration for growth in production, Williams hinted that ExxonMobil was set to increase its JV budget for 2018 operations.