Numerous aircraft have landed at the Maiduguri International Airport as the son and daughter of the Group Managing Director (GMD) of Nigeria National Petroleum Corporation, (NNPC), Kyari Mele, wed today. 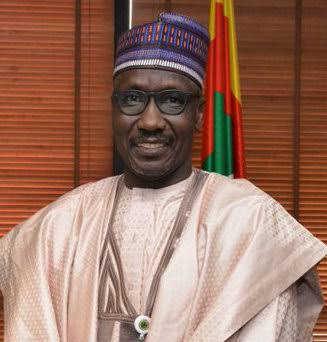 The aircraft, according to sources at the airport, conveyed guests attending what is turning out to be the biggest event in the state.

According to the report the GMD’s son, Muhammad, and daughter, Sadiya, got married to their spouses on Saturday.

The GMD had on September 9 tweeted about his son and daughter’s wedding where he announced the date for the big day.

He had also in the same tweet said “he needed no support, other than prayers, from members of the public to organise the wedding”.

“My son Muhammad and daughter Sadiya wedding set for 28th December 2019. Grateful and expectant of your prayers. Sending no one to solicit or rally for material help of any kind.”

Sources at the airport said about 43 aircraft of various sizes, mostly chartered, have landed at the Maiduguri International airport today.

The sources added that 20 aircraft had on Friday brought guests to Maiduguri ahead today’s wedding.

“All of the aircraft brought guests attending the wedding of the GMD’s son and daughter,” said the source.

The source added “no doubt there are state governors among the guests, but one cannot say who they are because they were all being conveyed in protocol vehicles with tinted glasses right from the tarmac.”

The Borno state government is also playing a major role in assisting the new GMD to host his high ranking guests.

Government protocol vehicles, including scores of other vehicles poached from various public institutions, have been deployed to help move thousands of guest around the city.

Apart from providing the massive Government House Maiduguri’s Multipurpose Hall as the venue of the reception, which many believe is in order “due to security concerns,” most of the big guests are also being hosted in various government lodges.

Most hotels in Maiduguri were reported fully booked days to the wedding.

Public movements have been restricted in most part of Maiduguri, as the city geared up for the big wedding.

Armed security personnel, mostly police and civil defence personnel manned most of the dual carriage routes that lead to the venue of the wedding from the Maiduguri airport, forcing commuters to funnel into a single lane.

The routes leading to the GMD’s GRA resident have also been partially shut down.

The roads to the government House Maiduguri, where the wedding reception is expected to hold have also been barricaded by security personnel forcing commuting residents to snake through neighbourhood routes to get to their destinations.

The GMD’s children events are not the only weddings in Maiduguri today.

There are over 30 other weddings going on in the town. But the big wedding has taken the shine off most of them.

The GMD’s children weddings were jointly solemnised at the palace of the Shehu of Borno, His Royal Highness, Abubakar Garbai Elkanemi.

Governor of Borno, Babagana Zulum, and the state’s former governor, Ali Sheriff, played the role of ceremonial parents to the children at the wedding.

Top amongst the guests are the National Security Adviser, Muhammed Monguno; the Oba of Lagos, Rilwan Akiolu; ministers of the Federal executive council, serving and former governors, senators, and northern Emirs

Sarki Auwalu takes over from Ahmed Shakur at DPR as Director