The Nigerian National Petroleum Corporation (NNPC) has expressed its readiness to train the children of the late President of the Petroleum and Natural Gas Senior Staff Association of Nigeria (PENGASSSAN), Comrade Francis Olabode Johnson, to any educational level. 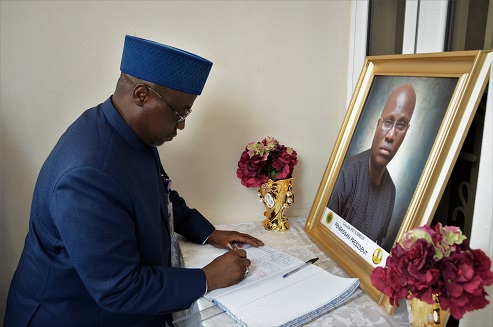 Group Managing Director of the Corporation, Dr. Maikanti Baru, made this commitment when he led top management of the NNPC to condole with the widow of Comrade Johnson at the family house in Kubwa, a satellite town in Abuja.

Baru said the news of the sudden death of FOJ, as he was fondly called, came to the entire Oil and Gas Industry, the NNPC Family and PENGASSAN, as a rude shock.

He described the late PENGASSAN President as a pragmatic leader who was always properly aligned with the direction of management and the entire workforce, adding that it would be very difficult to fill the vacuum that his death had created.

The NNPC helmsman described late Johnson as an uncommon bridge builder whose wise counsel the Industry would sorely miss, adding that he lived a fulfilled life.

“Comrade Francis Olabode Johnson was not just a union leader but he was a personal friend to me. He was a loyal comrade that reduced industrial friction between management and the workforce to its barest minimum. FOJ ensured stability in the Oil and Gas Industry that led to optimum productivity for the common good of the nation,” Baru lamented.

He said the late labour leader was always there to give useful counsel to management on how best to avoid industrial dispute, adding that he was a pillar of support to the NNPC, International Oil Companies and the entire value chain of the Industry.

Baru reassured the wife and children that the NNPC would always be there for them at all times and prayed God to grant the late Comrade Johnson eternal rest in His bosom.