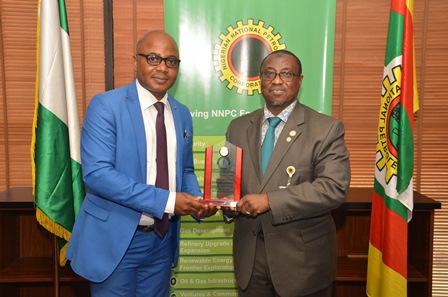 The Nigerian National Petroleum Corporation (NNPC) will equip 50 per cent of its work force with requisite knowledge on how to identify and examine fraud as part of measures to stamp out corruption from its system.

The Group Managing Director of the NNPC, Dr. Maikanti Baru, made this commitment on Tuesday in Abuja while receiving a delegation of the Association of Certified Fraud Examiners (CFE), Abuja Chapter, led by its President, Mr. Ishili Emmanuel.

The GMD said training staff on fraud examination would ensure that NNPC was not involved in the five per cent annual global revenue loss to fraud.

“We will seize the opportunity offered by the CFE to train at least 50 percent of our staff on fraud examination. We do know that there are a lot of advantages in getting as many staff as possible trained in fraud examination”, Dr. Baru said.

He explained that as the major foreign exchange earner for the country, NNPC was very conscious of issues of corruption in all its ramifications and had gone beyond looking at corruption in terms of money alone.

“NNPC under my leadership, has instituted what we call Governance, Risk and Compliance Division which is very much in line with the mission of CFE. The Division is not only looking at corruption in terms of naira and kobo but also at the system itself. The new Division will ensure that fraud did not manifest in our system and if does, it would be quickly nipped in the bud,” he said.

He stated that corruption was a major waster of human resources as staff found culpable were usually prosecuted and sacked, adding that it was better to train them on fraud and safeguard them.

The GMD said the Corporation was at the vanguard of providing support to anti-corruption agencies in the country by providing them with necessary information on cases involving its employees and other relevant third parties.

“We have been using the anti-corruption bodies effectively. Particularly, we have very strong collaboration with the ICPC,” the GMD stated, stressing that during his stint as the Chairman of the NNPC Anti-corruption Committee, they saw the need to train and certify fraud examiners which was why the current and long-standing secretary of the committee was a certified fraud examiner with about ten others that have completed their training and were awaiting certification from the American body.

The GMD directed the GRC Division to immediately commence the process of registering NNPC as a corporate member of the CFE, urging the body to avail the corporation of all the opportunities therein in its fight against corruption.

Speaking earlier, the President of CFE, Abuja Chapter, Mr Ishili Emmanuel, stated that the NNPC as the apex oil and gas company in the country ought to have a robust human asset capability to deal with many of the unique socio-economic development challenges within the oil and gas industry.

He applauded the GMD for his tenacity and commitment to fighting corruption since assuming duty as the helmsman of the corporation.

Mr. Emmanuel stated that by joining the CFE as a corporate member, the NNPC stood to benefit from the pool of unlimited anti-fraud resources like other world class organizations around the world.

He explained that membership of the anti-corruption body would make a bold statement about the Corporation’s integrity, capacity and willingness to entrench the culture of transparency and anti-corruption in its system.

The GMD was also conferred with a fellowship of the association and decorated with its prestigious lapel pin.

BoI Partners MADE on funding the leather production

2017 Lafargeholcim Awards for Sustainable Construction; 75 Nigerians Are In The Race