A major player in the oil and gas industry, Exxon Mobil, has attributed its landmark achievements in the Nigerian oil and gas sector to the Nigerian National Petroleum Corporation (NNPC), noting that the result-oriented leadership provided by the corporation has helped a great deal in growing the energy sector in Nigeria. 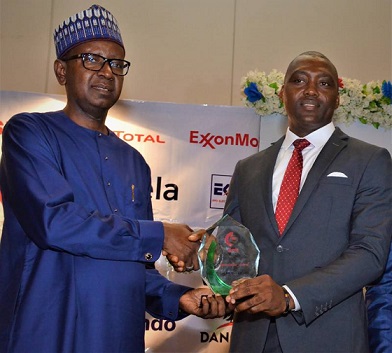 Chairman of the Nigerian Association of Energy Correspondents (NAEC), Mr Tunde Dodondawa (right), presenting a plaque to the NNPC GMD who was represented by the Chief Financial Officer (CFO) of the corporation, Mr. Umar Ajiya (left) at the annual conference of the association which held at Eko Hotel, Lagos …Thursday.

The Chairman and Managing Director of the ExxonMobil, Mr. Paul McGrath, who is also the Chairman of the Oil Producers Trade Section (OPTS) of the Lagos Chamber of Commerce and Industries (LCCI), disclosed this today at the 2019 edition of the Annual Conference of the Nigerian Association of Energy Correspondents (NAEC) in Lagos.

A press release by the Group General Manager, Group Public Affairs Division, Mr. Ndu Ughamadu, stated that the ExxonMobil boss, in his opening remarks as chairman of the conference, listed NNPC prompt settlement of the cash-call arrears as one of the many interventions by the corporation that helped the company to remain stable in business.

In his keynote address, the Group Managing Director of the NNPC, Mallam Mele Kyari, said the corporation, beyond efforts to fix the refineries, was focusing on unlocking the huge opportunities in the gas sector to fast-track the country’s industrialization agenda.

“Of much importance is the position of gas as a catalyst for national development. All hands must be on deck to ensure that, using the realistic government policies, gas is fully utilized domestically to power industries and fast-track the nation’s march towards industrialization”, the GMD stated.

Mele Kyari, who was represented by the corporation’s Chief Financial Officer, Mr. Umar Ajiya, stated that the national oil company was looking at the full deployment of modern technologies to drive efficiency and institute a transparent system that could compete favourably with other players on the global stage.

“We are also leveraging on technology and innovation to achieve the goal of building an energy company of global excellence, ready to impact positively on the nation’s economy”, he said.

The NNPC boss emphasized the need for all stakeholders to work together in an atmosphere that is beneficial to all players in order to place Nigeria on the path of development.

Mele Kyari informed that the corporation was committed to taking critical decisions that would position Nigeria on the path of growth, prosperity and development, noting that the teeming Nigerian youth have high hope in the current leadership.

Earlier in his address, the Chairman of the Nigerian Association of Energy Correspondents (NAEC), Mr. Tunde Dodondawa, said there was need for the country to look beyond fossil fuel and venture into renewable energy for a safer environment.

Kindly Share This Story:Sequel to the new zeal my Members of the Association of Nigerian…