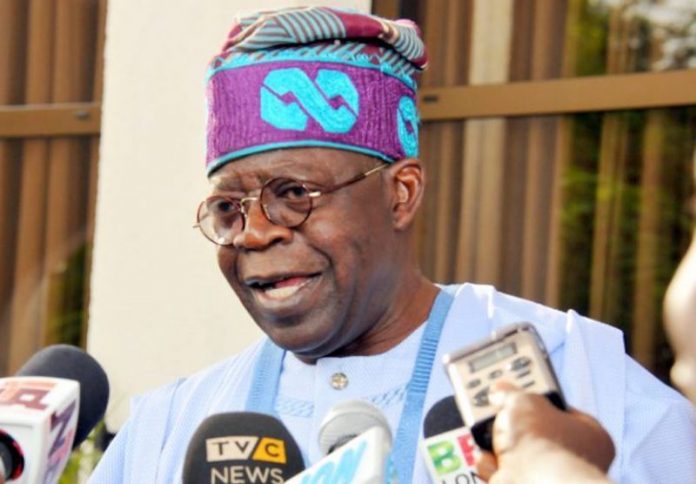 The National Leader of All Progressives Congress (APC), Senator Bola Tinubu, yesterday repudiated allegation that he masterminded the deployment of soldiers in the Lekki Tollgate to shoot protesters, saying that there should be no excuse for the shootings.

Tinubu also denied ownership of the tollgate and advised the Lagos State Government to close the tollgate permanently or use the revenues to compensate the victims of the protests and police brutality in the state.

In a statement he issued yesterday, the former governor of Lagos State described the allegation of his involvement in the shooting as a complete and terrible lie, stressing that he did not order any assault against anybody and did not have prior knowledge of the action of the soldiers.

Tinubu reaffirmed his firm belief that no one should be harassed, injured or possibly killed for doing what they have the constitutional right to do in making their contributions to a better, more equitable society.
He said as a political figure, he was accustomed to people attributing to him indiscretions of which he had no knowledge of and in which he played no role.

He described the allegation that he called on soldiers to kill his people as the foulest of lies.
Tinubu said: “The use of strong force against any peaceful protesters is indefensible, completely outside the norms of a democratic society and progressive political culture to which I aspire and have devoted my public life. That people were angered by the reports of violence and death is acutely understandable.

“Understandably outraged, people sought to hold someone accountable. For various reasons, I became the most available scapegoat. Some people don’t like me because they believe the false rumours uttered about me over the years. Some maligned my name because they hide ulterior motives and harbour unrequited political scores they intend to settle.”

He added that his detractors had earlier accused him of sponsoring the protests.
He stated that when that did not work, they sought to incite the people against him by alleging that he ordered soldiers to quash the same protests they first accused him of organising.

“My opponents have every right to oppose me politically but let them have the courage to do so in the open, above board and to employ facts not evil fiction in their efforts against me. They have no right to slander and defame anyone with the terrible and vile fabrications now cast at my feet.
“Those who have decided to hate me will hate me regardless of the truth. Again, they have the right to think as they may and I am not troubled by their unfounded animus. Today, I speak not to them. I leave them to the workings of their own conscience,” he said.

According to him, the slander aimed at him is based on the untruth that he owns the tollgate concession.
He said his detractors accused him of instigating the Lekki assault because the protests had caused him to lose money due to the interruption of revenue collection at the tollgate.

“I ask people to thoroughly investigate the matter of my alleged ownership of the tollgate. By seeking facts, instead of being swayed by gossip, you will find I have no ownership interest or involvement in the toll gate. Having no business interests in the operation, my income remains unchanged whether one or 100,000 vehicles pass through that gate,” he said.
He described the tollgate as a public asset and proposed to the state government that it should be left closed for an indefinite period.

“If it is reopened, revenues should be donated to the confirmed victims of the Lekki attack as well as to other identifiable victims of police brutality in Lagos. Let the government use the money to compensate and take care of those who have lost life or limb in the struggle for all citizens to go about the quiet, peaceful enjoyment of life without fear of undue harassment at this or that checkpoint,” he said.
He acknowledged being the promoter and investor in The Nation Newspapers and TVC, a broadcasting organisation that hoodlums burnt last week.

He noted that when the social media was awash with an allegation of a plot to attack the two media companies, he did not request for the army or police to kill or injure those who razed and vandalised them.
“I did not want any bloodshed. These elements, mostly hirelings of my political opponents, wreaked their havoc and destroyed those buildings and facilities and I thank God that the employees of these two media institutions managed to escape largely unharmed,” he said.

Tinubu also noted that while burnt buildings and damaged equipment can be rebuilt or replaced, there is no replacement for a dead person.

He urged those who claimed that he ordered violence in Lekki to face the sheer illogic of their assertions, saying that there is no explanation for why he would order soldiers to repel peaceful protesters from the tollgate where he has no financial interest, and chose to do nothing to protect his investments in his two media organisations.
He also said depending on the outcome of the investigation, the government may need to amend the terms of engagement for the deployment of military forces to control peaceful civil disobedience and protests.

Tinubu also stated that the time has come to take legal actions to allow for the creation of state police and the recruitment and training of many more police officers.
“Such state-created forces should be based on the modern tenets of community policing and optimal relations and cooperation with local communities,” he added.

According to him, measures such as these are needed to cure present gaps in how military and law enforcement agents treat the general public.