When writing about this, all we can think of is how excited we are that we’re going to be wasting time playing Snake again.

Details have emerged of the new Nokia 3310 which could be about to be re-released.

It is belived that the phone will be slimming down slightly and will be a bit lighter than the 2000 model of the phone – of which there are 126million.

It’s not expected that it will run android as it’s a ‘feature phone’ according to Vtech, but the desin will largely be the same as the old one.And, perhaps controversially, the phone will have a colour display – although it’s not expected to be high resolution so that it can keep battery power.

We’re expecting announcements from the Mobile World Congress which is taking place in Barcelona next week.

The phone was discontinued in 2005 – but now there’s new hope for people who want a no frills handset that can stay on for up to ten days.

HMB Global, which owns the rights to the Nokia brand, is expected to announce four new handsets for sale, among them the 3310.

It’s set to retail at around £49, VentureBeats reports.
Its reportedly intended to be marketed to European consumers, who may be willing to use it as a second phone.Mobile phone reporter Evan Blass said that the phone will be a ‘homage’ to the 3310.

Sales could be driven by a nostalgia factor, given that the phone has kept a kind of cult status among people who remember how long it lasted compared to today’s iPhones and Samsung Galaxies.

Technology may have come on a little since the 3310’s heyday, but it still has a huge fanbase Vtech

News of a potential re-launch for the iconic Nokia 3310 took the world by storm earlier this month, and the likelihood of a resurrection is growing stronger by the day.

Fresh leaks have shed more light on the capabilities of the heavily tipped 2017 version of the handset, which is expected to go on sale for €59 (£50).

According to Chinese site Vtech, the new Nokia 3310 will feature a colour screen, rather than the monochrome 84 x 84 display of old. 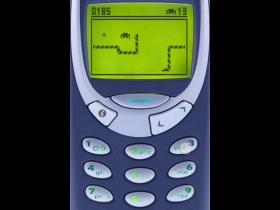 It won’t be particularly sharp, in order to avoid sapping battery life, but the splash of colour should make old favourite Snake a little more compelling to play.

It won’t run Android, unlike the other handsets that HMD Global, which owns the rights to the Nokia brand, plans to unveil at MWC 2017 this weekend, and will be marketed as a feature phone.

According to the source, the new 3310 is also expected to be available in a range of new colours, including red, green and yellow, and will be slimmer and lighter than the original.

There’s a cult around the Nokia 3310, which was much-loved for a multitude of reasons.

It was well-designed, boasted terrific battery life and was incredibly hard-wearing, with fans hailing it as ‘indestructible’.

Consumers will be hoping that the revamped handset doesn’t stray too far from its roots.