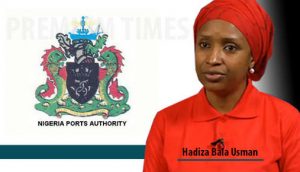 The Managing Director of the Nigerian Ports Authority, NPA, Hadiza Usman, has denied any investigation of the agency by the Presidency.

In a statement signed by the NPA boss on Thursday, Ms. Usman said she had nothing to hide, and was ready for probe.

The NPA boss said she would not bend in her resolve to rid the agency of corruption, adding that there was no meeting between her and any APC Chieftain.

Ms. Usman was reacting to reports that the presidency has ordered an investigation into the financial dealings of the Nigerian Ports Authority, NPA, over allegation of fraud.

“My attention has been drawn to malicious lies being bandied around by a Prince Henry Nwazuruahu on my person,” Ms. Usman said.

Ms. Usman said in the last few days, she had faced a barrage of “malicious lies” directed against her in the media, saying she will not budge on her position on compliance with Federal Government of Nigeria policies.

“I will not bow on my stance to rid the NPA of corrupt practices,” she added.

“I will not be cowed or intimidated into conforming to corrupt practices of cheating the Federal government of its revenues.

“I have been issued with death threats and veiled messages conveying that my life is at risk because of the stance I have taken. No false media attacks or threats to my life will stand in the way of my doing the right thing,” she said.

She affirmed that the agency had not received any notification by the presidency of an investigation, saying the agency is open to any of such investigation as it has nothing to hide.

Ms. Usman was appointed Managing Director of the NPA in July 2016.

How JumiaPay is helping Customers to Save Money