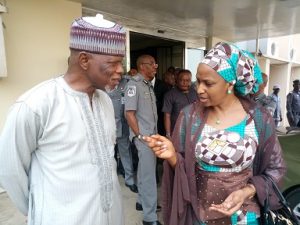 The Nigerian Ports Authority (NPA) and the Nigerian Customs Service (NCS) have embarked on a new collaboration, aimed at promoting trade, through the introduction of the much-awaited Single Window (SW) platform at the nation’s ports.

To do so, the two agencies, according to the NPA Managing Director, Ms Hadiza Balla Usman, have also decided to anchor the establishment of the SW on an intense automation policy and on the introduction of Standard Operative Procedure ( SOP) at ports.

“The goal of trade facilitation is to help trade across borders, import and export faster, cheaper and more predictable while ensuring its safety and security”. Hadiza highlighted, stressing that the  adoption of SW would make Nigeria’s ports competitive in the international trade network and boost the trade facilitation programme of the government.

“Trade facilitation focuses on simplifying and harmonizing formalities, procedures and the related exchange of information and documents between the various partners in a supply chain.

“Transparency, simplification, harmonization and standardisation of port operations, she added, could only be achieved by embarking on the establishment of a well articulated single window system.

“I would therefore, urge us not to lose track as well as relentless commitment as to meet the target of Nigeria joining 20 other countries to be in the forefront of implementing an efficient, effective and sustainable single window in 2020, ” she said, while speaking during her courtesy visit to the  Comptroller General of Customs, Col Hameed Ali  (Rtd) in Abuja, Wednesday, pointing out that the synergy on SW would boost government revenue and promote Public Private Participation through the attraction of local and Foreign Direct Investment ( FDI).

Hadiza said Government, was aware of its responsibilities to create the enabling business environment to realize the objective; and adding that the Federal Government was equally determined to make the ports more efficient, safe, secure, productive and Eco-friendly practices of its operations be it logistic or financial base.

She consequently reasoned that NPA and Customs, being the arrowhead agencies driving the logistic and financial portals  on behalf of the government therefore have the greater  responsibility to synergise and build up a common industry culture around the ports towards achieving the right level in trade facilitation.

In his response, the CGC, Hameed Ali said that her visit would lead to regular meetings and constant consultation between the two agencies, thereby de-emphasizing courtesy visit.

The Nigeria Customs Service, Ali assured, would do everything possible in  promoting the trade facilitation programme of the government through collaboration with sister agencies and robust  initiatives to promote business  at ports.

He also promised to collaborate with the NPA to rejuvenate port operation and port security committees and ensure that the meetings are attended by senior officials of all the affected agencies and take responsibilities.

In the same vein: a new understanding resulting from the meeting between the media and the nation’s maritime parastatals may soon leads to a high class Port Reform Conference, billed to bring together, all agencies connected with Port Administration in a glorious bid to create a seamless business environment, on March 30 2017 at the Civic Centre, Lagos.

Coming with the theme “Making Nigerian Sea Ports World Class”, the conference which is being anchored on an acceptable template with defined timelines is at the instance of The Nation newspaper and the Federal Ministry of Transportation, with its tentacles covering the Nigerian Maritime Administration and Safety Agency (NIMASA), Nigerian Ports Authority (NPA) and the Nigerian Shippers Council. There is likelihood however, that the Nigerian Railway Corporation (NRC) may be also included later.

This came to light, after a delegation of the Editorial Board of the Nation Newspaper led by its chairman, Sam Omatseye and the chief strategist of Epsilon Limited  Amechi Chukwujama came to visit and brief the NIMASA Director General, Dr Dakuku Peterside and his management team at the agency’s headquarters in Lagos, especially in respect of a collaboration with the Ministry, and it’s preparation for the proposed port reforms conference, in conjunction with the Federal Ministry of Transportation.

Chukwujama told the NIMASA Management that though a number of positive developments had been recorded in the Maritime Sector since 2006, there was still room for improvement, particularly in view of President Muhammadu Buhari’s quest for accelerated economic growth through increased revenue and job creation.

Throwing his weight behind it, the NIMASA Director General, Dr. Dakuku Peterside tasked Maritime stakeholders to increase their input in the ongoing Port Reform Agenda of the present administration, in other to timely reposition the maritime industry for greater efficiency.

Peterside told the delegation that there is indeed, the need to harness a synergy of ideas from all stakeholders towards ensuring a very user friendly port system that would be a model in the sub-region, stressing that, the need for seamless transaction at the ports, cannot be over emphasized.

He agreed that the proposed conference would help reposition the Maritime Sector for the realization of the change Agenda of the President Muhammadu Buhari led Administration.

Speaking in the same vein, the Executive Director (Finance and Administration) Bashir Yusuf Jamoh made a case for the inclusion of the railways in the intended ports reform in order to decongest the roads.

Fashakin Rotimi Joseph (Executive Director Operations) on his part commended the Nation Newspaper for conceiving and proposing this conference which is expected to create awareness and set acceptable standards for port operations in Nigeria.

Naira stabilises at N485 per dollar at parallel market