.As NASS sets to pass budget before Christmas

For two weeks running the Nigeria Ports Authority (NPA) has refused to make public details of its insurance of the burnt headquarters building, even as indication is rife that estimated budget for the ‘rebuilding’ the destroyed headquarters would be in the 2021 budget set to be passed into law in by the National Assembly about three weeks time. 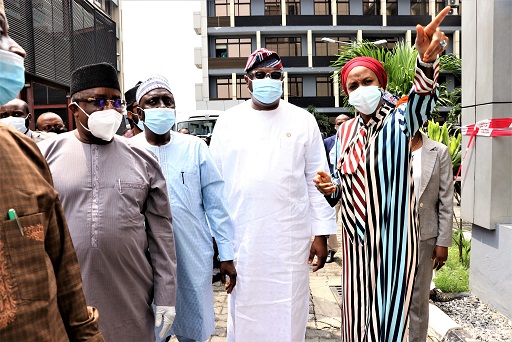 The National Assembly had reaffirmed to pass the 2021 Appropriation Act by the second week of December 2020 before proceeding on their Christmas vacation.

To this end, experts reiterated at the weekend that it is the responsibility of the insurers to compensate the Ports Authority to the extent of their loss in the hoodlums at the headquarters insofar as it was actually insured as reportedly disclosed by the managing director of Nigeria Ports Authority, Ms Hadiza Bala-Usman; and there was no default in premium payments.

The experts stated that the Federal Government has no business budgeting taxpayers’ money for the rehabilitation of the burnt headquarters, saying that going by the submission of the NPA’S General Manager Corporate and Strategic Communication, Engr. Adams Jato, the headquarters has made insured cover for ‘fire and theft’ and therefore is entitled to full compensation by the insurers.

Engr Jato while respond to question of an insurance company handled the NPA affair, he said “I have had more than 1001 requests on the names of the insurance companies. I think we should them carry out this assignment devoid of any distraction, please”

When contacted, the President of National Council of Managing Directors of Licensed Customs Agents (NCMDLCA), Mr. Lucky Amiwero said that since the building is insured for fire and theft and NPA did not default in its premium payments, it is the responsibility of the insurer to rehabilitate the building and replace stolen items.

“Once it is insured, the insurance company takes responsibility for everything; that is the truth,” he stressed.

Also speaking, on the same issue, the National Coordinator of Save Nigeria Freight Forwarders, Importers and Exporters Coalition (SNIFFIEC), Dr. Osita Patrick Chukwu, said that if the affected assets were insured, “the insurance company should take care of the building it doesn’t matter if Federal Government is the owner of the property.

“The insurer must be able and be sure that all values are made available and all losses are being counted that is it.

“So they shouldn’t use Federal Government money to pay? Why should they use government’s money when it is insured,” he queried.

However, speaking on the delay by NPA in making public the value of its losses, name or names of the insurers and other details about the insurance of the building, President of the National Association of Government Approved Freight Forwarders (NAGAFF), Mr. Increase Uche differed from others two earlier mentioned above saying there is need for them to be allowed sometime to finish their investigation as it is just about a month the incident took place.

“I think they are taking their time, it will be too early for us to start saying whether they are hiding anything from us let’s watch them and see. To me the truth must surely surface. It’s just barely a month now that the incident took place and investigation is still going on and I don’t think they will be in a hurry to start disturbing the insurance company which covers the property. I can’t blame anybody for now until maybe after two or three months and all those things are not made open then one can start to complain, to me it is too early in the day to complain,” he said.

Amehnews recall that the Chairman of the House Committee on Ports and Harbour, Hon. Garuba Datti Muhammed, had during their visit to burnt NPA head offices said: “We are here to assess the extent of the damage that was caused by hoodlums and arsonists. We have gone round and seen the extent of the damage to the building and cars. This will help the National Assembly to assist NPA in rebuilding the damage on the torched building.

However, part of our discussion with them was for the NPA to bring its budget to the National Assembly because we advised them to adjust the budget to accommodate the rebuilding of the damages,” he explained.

Kindly Share This Story:In line with its objectives to regulate, supervise and ensure effective administration…