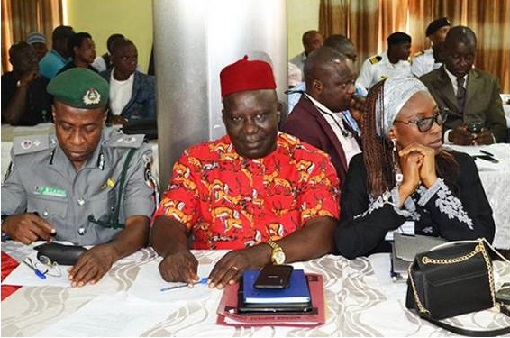 The Apapa Port Manager, Mrs. Funmi Olotu who said this at an event in Apapa last week, appealed to the terminal operator to provide spaces for badges to enhance cargo evacuation.

Olotu vowed to always put the terminal on the spot until its managers start doing the right thing.

“I said it yesterday I am going to say it again, APMT I don’t know if you are here, I am going to put you on the spot, if it will take you to start behaving the way we want you to behave in Nigeria. You cannot come and be giving it to us anyhow here, there is sanity from where you are coming from”, she said angrily.

“Nigeria is a great country, don’t come and be telling us about the lapses we have; there is no country without lapses. What we are saying is that these people are coming to you and the vessels are getting bigger, APMT has just four berths, but with the sizes of ships they are having now, those four berths can comfortably take three vessels at a time”

“You are badge operators they come in through Eco Support or through ENL and we have been appealing to APMT give us a badge space within your terminal. Because this boxes are going to end up taking over the whole space so why are they coming through ECO Support”, she explained.

Speaking more on the alleged extortion by APM Terminal, the port manager said: “I opened the back gate for you and gave you an approval, only for them to turn back and start collecting money. Why do you collect money for me for opening the back gate, I only wanted a solution”?

Speaking further, she urged the terminal to acquire more cranes for cargo evacuation, even as she pleaded with them to allow ships with cranes at their terminal to complement the terminal’s inadequacies.

“So we are appealing to you again we need a badge space within the APMT, we need badges to be able to bring trucks and boxes into the port and they can just go straight to where they are supposed to go”, she stressed.

According to her, “Another issue we want to talk about here is flying of trucks, some of you will ask, can trucks fly? yes trucks can fly. Because what we have discovered is during the day when all eyes are open everybody will now comply with the call-up system, but around 5am you will see manufacturers’ trucks”

“And let me talk to manufacturers go and talk to your drivers, most of the things we have observed is that you drivers are matching brake and collecting N20, 000 I have pictorial evidence, videos and documents to back it up”

Stressing further she said, “And I will explain what I mean by matching brake, because you have been given that priority to move around that belt, your drivers will now tell their colleagues I can allow you to stay in front of me if you bring N20, 000”

“So imagine if he does that for five trucks we are talking about N100, 000 and he does not even know the implication of what he is doing. Manufacturers talk to your drivers anything we give you that opening and we see other trucks in front of you we will blacklist that truck. I told them I have all the pictures and plate numbers I am making a compilation” she concluded.