The Nigerian Shippers’ Council (NSC) has ordered freight forwarders operating at the nation’s seaports to ignore unauthorized policemen that are involved in illegal interception of already cargoes. 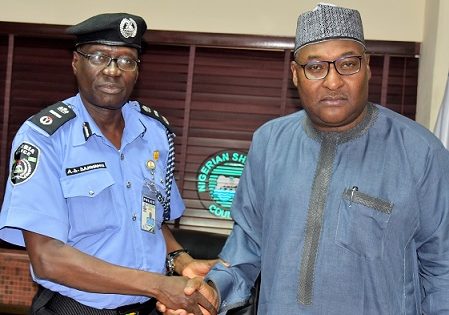 The Executive Secretary and Chief Executive Officer of the Council, Mr. Hassan Bello gave the order when the Maritime Police Command led by AIG Abdul Danwawu paid him a courtesy visit in Lagos on Tuesday.

According to him, these illicit activities by the police were impeding clearing processes at the Nigerian seaports.

The NSC’s ES/CEO reminded the stakeholders of directive from the Inspector General of Police, IG Mohammed Adamu which reinforces the mandate of the Assist. Inspector General (Maritime) and the Commissioners of Police in charge of Western and Eastern authority as being the police formations with primary responsibility for police operations at all ports.

“Other men and officers of the police have no business in the interception of cargoes at the ports,’’ he said.

He expressed the Council’s readiness to embrace the order by the IG to address the unwholesome practices by police.

He maintained that the NSC’s mandate as Port Economic Regulator is to sanitize the ports, ensure that costs remain reasonable and Nigeria competes with other countries in terms of best practices.

In his address, AIG Abdul Danwawu assured stakeholders that the Maritime Police Command would always seek directives from NSC when it concerns stoppage of containers.

‘‘The Marine Police Command will cooperate with NSC to make the ports meet its aspirations’’, he added.

The Executive Secretary/CEO, Nigerian Shippers Council, Barrister Hassan Bello may have taken up the issue…