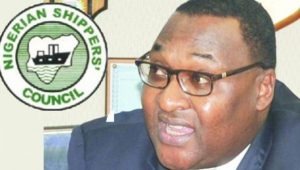 The Executive Secretary of the NSC, Hassan Bello

The Executive Secretary of the NSC, Hassan Bello, made this know yesterday when officials of the shipping line visited to the Council’s headquarters in Lagos.

Bello pointed out the other benefits of en-routing Benin Republic cargoes through Nigerian ports as it would improve relationship and reduce cost of doing business between both countries.

He pleaded for continuous collaboration between the NSC and the management of the shipping company to make Nigerian ports more efficient and effective.

ES/CEO applauded Maersk Lline for its immense contributions to the development of the Nigerian ports, adding that more was still expected from the shipping company.

However, Bello identified instability of cargo dwell time and lack of transparency in the port operations as some of the challenges facing the Nigerian ports.

He then called for more dialogue and collaboration in addressing these challenges.

“Nigerian Shippers’ Council, being the Port Economic Regulator, is primarily concerned with effective operations of stakeholders in the country.

NSC has settled a lot of disputes between operators and their customers and that is why I am advising operators not to take shipping cases to court.

The council has settled a lot disputes through dialogue which provided win-win situation for the aggrieved parties,” Bello said.

The NSC boss also called for stronger strategic partnership with Maersk Line for the Kaduna Dry Port to have access to cargoes adding that the Kaduna Dry Port, which had already been designated as port of origin and port of destination, was expected to begin operation soon.

Bello expressed optimism that the dry port, when fully operational, would boost the economy of the host state, decongest the ports and bring port services to their door steps.

However, Tohouo pointed out that there should be give and take in port operations which would ultimately favour government by improving its revenue.

In his words: Maersk subscribed to the dialogue being suggested by the Council to create sustainable platform. Though, we just entered the New Year; the Council should shoulder the task of regular stakeholders’ engagement from time to time, which will assist the growth of the maritime industry.

The managing director suggested that platform will involve sitting together to dialogue on the challenges to move the industry forward.

Kindly Share This Story:— SAYS CHAPTERS ARE NOT FIEFDOM OF ANY GODFATHER   The Association…