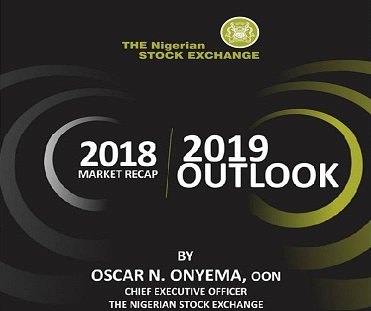 The Nigerian Stock Exchange (“NSE” or “The Exchange”) held its 2018 Market Recap and Outlook for 2019 on Monday, January 14, 2018, at the Stock Exchange House, Marina, Lagos. This annual event is a forum for the Chief Executive Officer of NSE, Mr. Oscar N. Onyema, OON, to brief the stockbroking community, analysts, media and other stakeholders, on the performance of the market in the preceding year and give prognosis for the market for the New Year 2019.

Delivering his presentation, Mr. Onyema stated that “the Nigerian economy continued its path of recovery, growing by 1.81% year on year in real terms as at the third quarter of 2018. The recovery was bolstered by increased stability in the macro environment as the CBN continued to pursue a relatively tight policy stance in an effort to curtail inflation while holding the benchmark rate steady at 14.00%; and effectively maintained liquidity and stability in the foreign exchange market during the year.  Fuelled by the economic recovery, year on year growth in capital importation to Nigeria reached 114.33% as at September 2018, from the corresponding period of the previous year”.

Reviewing the performance of the market in 2018, Mr. Onyema noted that “NSE equity market started the year on a high, with the All Share Index (ASI) reaching a ten-year peak of 45,092.83 in January. This was largely driven by the positive performance of the ASI in 2017 which emerged the best in Africa. As we approached the second quarter, political risks, oil price volatility and rising global yields resulted in bearish sentiments that saw the ASI and equity market capitalization fall by 17.81% and 13.87% to close at 31,430.50 and N11.73trillion respectively”.

“While listing activity remained relatively low during the year, (one listing and four delistings) equity turnover remained relatively stable, marginally declining by 5.45% to N1.20trillion. Turnover velocity inched up 0.91 percentage points to 10.25%, and likewise, the size of volumes traded in the period increased by 0.96% to 101.43billion with the Financial Services sector being responsible for the highest traded volume and value. In the year under review, foreign portfolio investments outpaced domestic participation by 1.73%, accounting for 50.87% of total transactions, while domestic transactions accounted for 49.13%. Within Domestic Institutional order flow was 56% while retail order flow was 44%”.

According to My. Onyema, fixed income market capitalization increased by 11.75% to N10.17tn from N9.10tn in 2017. He however noted that capital raising was dominated by the Federal Government who borrowed N1.16tn in a bid to finance fiscal and infrastructure deficits. State Governments raised N125.59bn in new debt capital, while corporates raised a total of N31.47bn. The market also witnessed the listing of a N100bn FGN Ijarah Sukuk designed to finance critical road infrastructure across the country.

With regards to NSE derivatives initiative, My Onyema said that “our technology infrastructure has been enhanced to support the trading launch. The rulebook has been created and is currently going through the approval process alongside on-boarding of dealing members”.

Speaking on the outlook for 2019, Onyema noted that the market sentiments in the first half of the year will be driven by uncertainty in oil prices as well as the 2019 general elections. “Accordingly, we anticipate volatility in equities markets first half of 2019, with enhanced stability post-elections. We believe swift approval and implementation of the 2019 budget will have a positive impact on companies’ earnings as well as consumer spending. Therefore, we expect an uptick in market activity during the second half of 2019”.

“To enhance our listing prospects, we have strengthened our government engagement efforts on privatization and listing of state owned enterprises, and we expect to take advantage of opportunities within this space during the year. We also intend to maintain our collaborative efforts with public and private sector stakeholders to advocate for market friendly policies, and cater to infrastructure financing needs as well as other capital requirements necessary for sustainable economic growth. The Exchange intend to work with the private sector as well, to catalyse the listing of more companies”.

Kindly Share This Story: The Director General of the Securities and Exchange Commission, SEC, Mr.…

Nigeria to save N127b yearly from cassava flour in bread