The management of the trading floor of the Nigerian Stock Exchange (NSE) in the trading data released over the weekend shown that NSE All-Share Index appreciated by 2.28% to close the week at 34,020.37 while Market Capitalization stood at N11.725 trillion respectively. 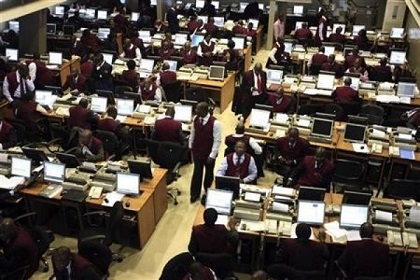 Similarly, all other Indices finished higher during the week with the exception of the NSE Insurance Index that depreciated by 2.81% while the NSE ASeM index closed flat.

Market recorded a total turnover of 3.628 billion shares worth N34.886 billion in 19,834 deals were traded this week by investors on the floor of the Exchange in contrast to a total of 1.272 billion shares valued at N13.993 billion that exchanged hands last week in 19,385 deals.

The Financial Services Industry (measured by volume) led the activity chart with 3.393 billion shares valued at N28.711 billion traded in 11,237 deals; thus contributing 93.55% and 82.30% to the total equity turnover volume and value respectively. The Consumer Goods Industry followed with 79.473 million shares worth N3.418 billion in 3,101 deals. The third place was occupied by Conglomerates Industry with a turnover of 70.175 million shares worth N113.486 million in 872 deals.

Also traded during the week were a total of 40 units of Exchange Traded Products (ETPs) valued at N493.60 executed in 4 deals compared with a total of 25,540 units valued at N2.646 million transacted last week in 10 deals.

KLT CUSTOMS HANDOVER FAKE ‘MADE IN NIGERIA’ CABLES  TO SON