Iju Tony Nwabunike, National President Association of Nigerian Licensed Customs Agents (ANLCA) said I am pleased to welcome you today as we are about conducting elections into chapters in the Eastern Zone of our great association comprising of Portharcourt Port Chapter/Portharcourt International Airport, Onne Port Chapter, Warri Chapter, Calabar Chapter and Enugu Chapter.

Today’s event will be a milestone in our efforts at making ANLCA a greater association of credible professionals who uphold the tenets of true democracy and representative leadership by popular demand.

The president of the ANLCA said this while addressing the Members Elected Officers into Chapters in the Eastern Zone  saying As the government and maritime business community explore possibilities of decongesting Lagos ports and create emerging ports in Lekki, Badagry, Ibaka, and others, the existing Eastern Ports are the low hanging fruits to actualise getting alternatives to Lagos.

In his words: I want to task you to enhance your capacities to handle higher volume of cargoes and prove your capacity in contributing to the non oil revenue source for the Nigerian government.

I recall that last year, the Nigerian Ports Authority (NPA), Onne Port complex successfully berthed one of the biggest gearless Maerskline vessel with capacity of 9,971 TEUs at the Federal Ocean Terminal (FOT), Onne . 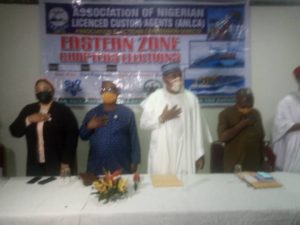 Nwabunike noted that this shows the capacity of ports in this part of the country to take higher volume of trade. As customs brokers, he added, I know we are ready on our part. In reality, his said we have become ready ahead of the government.

ANLCA President disclosed that Our Strategic Research and Planning unit of the ANLCA headquarters have discovered that not less than 20,000 direct and indirect jobs will be provided in the South-South and South East regions of the country if these ports are maximally utilised.

He pointed out that as you all know the terminal with the highest capacity of cargo handling machines in this country is in Onne at the West African Container Terminal (WACT). His stressed that it had value of US$2.5 million added to existing equipment as at 2 years ago.

“I am convinced that states with viable ports and strong maritime economic background have no business with poverty. I hereby enjoin the Federal and state governments (especially the ones where ports are already situated) to consult our expert inputs on how best to utilise their maritime assets for increased productivity. 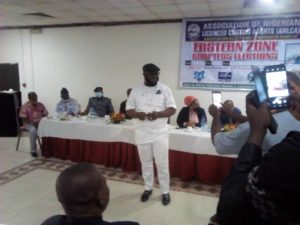 He noted that it has become imperative that you get ready to trade with these countries taking advantage of the window of opportunities to be provided by AfCFTA. Nwabunike calls on members to look beyond handling import cargoes alone because Nigeria will be eyeing exports of agricultural produce to some of these countries too.

According to a 2020 World Bank publication, the president noted that the African Continental Free Trade Area (AfCFTA) agreement will create the largest free trade area in the world measured by the number of countries participating. The agreement brings together 1.3 billion people across 55 countries with a combined gross domestic product (GDP) valued at US$3.4 trillion, he reflected.

He nailed the nail on it head saying “We as customs brokers have roles to play in deepening intra African trade and ensuring seamless cargo movement within and outside our continent. Therefore, I urge you all to approach this emerging basket of opportunities with optimism and positive minds towards making the best of it.

He remind the members saying while you sharpen your ICT capacities for trade purpose, I also urge us to embrace the learning of international languages like French, Mandarin (Chinese) Arabic and other means of international communication for business transactions .

Don’t forget that our profession brings us in sync with national economy, security and social well being of all Nigerians, he said. “For this reasons I urge you all to raise your degree of compliance, continue to avoid anything unlawful and promote International best practice in all you do.”

Nwabunike reiterated that I enjoin you to promote compliance and sincerity with importers at all times in your dealings while replicating the overall good rapport we have built at the national level with various government agencies at the chapters and zonal levels.

Our calls for total compliance with the law and zero tolerance for corruption remain uncompromised now and always, he stressed.

The President of ANLCA applauded his members saying I am pleased with the very peaceful, interactive and robustly engaging methods all the contestants have applied before, during and after the campaigns leading to the elections today.

“As a body, accept the congratulations of the National Executive Committee (NECOM) for your orderly and brotherly conducts.  We are proud of you, he added.

He reminded them that “ANLCA is one strong and indivisible group. Don’t be distracted. Our strength is in the collective unity we all profess and uphold irrespective of tribal, lingual and religious differences.

Nwabunike without missing words said these elections are pivots for our ever strong unity. Therefore, he stated that it’s a routine among distinguished practitioners and I must reiterate that you all are ambassadors of the great ANLCA. We all are Victors. No one is a loser in this association

“Those to be elected through this meeting should take a cue from the national body and keep abreast of developments like training and retraining programmes we shall be doing directly and virtually later in the year. 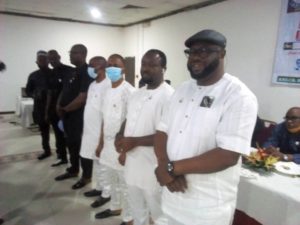 “I urge all leaders at various levels in ANLCA- chapter, zonal and national to have listening ears and be willing at all times to solve all operational problems brought before them by our members

He reechoes that as I have always said since last year; don’t lower your guard on compliance with Covid19 protocols. The second wave is on and real and ANLCA is at the vanguard to flatten the curve in our ports and within the total logistics chain, he added. Continue to be part of our Covid19 compliance drive for we all to survive it with our families, he urge all.