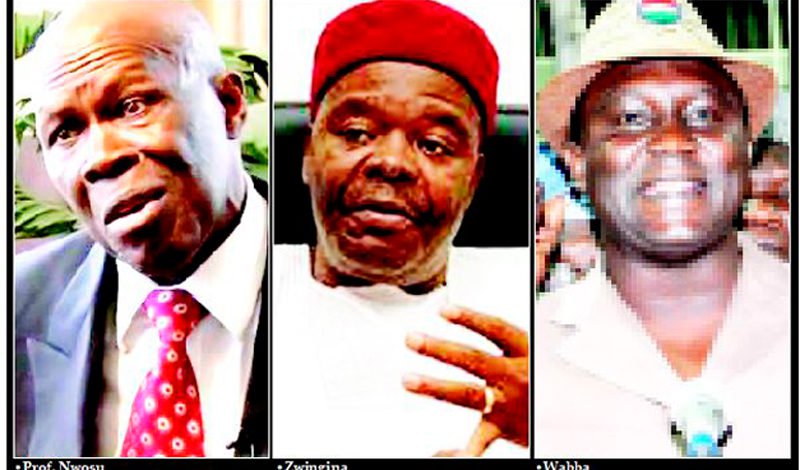 In the view of the man who conducted the historic  presidential election, Prof. Humphrey Nwosu,  the recognition of the date as Democracy Day and the honour for “the winner will rekindle the national consciousness of all Nigerians for a better nation”.

Nwosu, who commended President Muhammadu Buhari for his action, expressed his opinion in a letter to the Federal Government in response to his invitation to attend today’s ceremony where the late Abiola, the late Chief Gani Fawehinmi (SAN) and Amb. Babagana Kingibe will be decorated with national honours.

Nwosu chaired  the defunct National Electoral Commission (NEC),which conducted the election – Nigeria’s freest and fairest ever. It was annulled by the military regime of Gen. Babangida for no credible reason.

In the letter sent through the office of the Secretary to the Government of the Federation (SGF), Boss Mustapha, Nwosu, who is overseas, regretted that he was unable to attend the ceremony.

Nwosu’s letter reads: “I thank His Excellency, the President of the Federal Republic of Nigeria, Muhammadu Buhari and the Federal Government of Nigeria for recognizing June 12 as Democracy Day and also honouring the winner of June 12, 1993 presidential election, Chief M.K.O. Abiola.

“Indeed, June 12, 1993 marked a turning point in Nigeria’s tortuous journey towards a democratic polity. It is an honour to the very hard-working men and women of the defunct National Electoral Commission under my leadership at this long-awaited recognition. I humbly commend this action by the President.

“Undoubtedly, the democratic system of governance is the best, especially for the multiethnic nation like ours. I thank you for building on the foundation which my team and I labored strenuously to establish and actualise on June 12, 1993. It is our hope that expanding the frontiers of democracy of which all the people of Nigeria, regardless of ethnic group, will provide economic, social and developmental benefits that will certainly make Nigeria a great nation not only in Africa but across the world.

“Certainly, the scheduled event on Tuesday, June 12, 2018 will rekindle the national consciousness of all Nigerians for a better Nation. Unfortunately, due to circumstances beyond my control I will not be present at the investiture ceremony as I am outside the country.”

To those calling for Nwosu to also be honoured, he said:“This is not the end of the award. Nwosu came up with Option A4, a little to the left, a little to the right. He was sounding comical.”

The former Deputy Senate Majority Leader described the honour given to Abiola as a relief to the June 12 crusaders that their efforts were not in vain.

The honour given to Abiola “has been of national character and non-partisan,”he said,  adding that it cuts across the six geo-political zones.

The political scientist said the legal controversy trailing the post humous national honours was unnecessary and unfortunate, stressing that there is nowhere in the law where post humous awards are prohibited.

Zwingina, speaking on Channels Television , said: “The President has held consultations. The President has his Attorney-General and vice-president, who are Senior Advocates of Nigeria (SANs). Post humous awards have been given in the past to our past heroes who have died. Those objections and criticisms are based on partisanship. They are political. It is a free country. They can go to court, which will be unnecessary.”

He added: “The conferment of GCFR is a tacit recognition of Abiola as a former president. Now, renowned public places should be named after him. He deserves it. “

The politician said the move by the President may attract political capital, stressing that there is nothing wrong about it.

Noting that former President Goodluck Jonathan had attempted to immortalise Abiola, he said his approach could not pass the tests of integrity and credibility, which will make Nigerians accept the move.

“You don’t change the name of a university without consultation. The procedure was wrong, although the idea was good. The opposition came from the alumni members, students and staff. The President should have held consultations with the judiciary, the legislature, the Council of State.”

The former Deputy Senate Leader recalled that former President Olusegun Obasanjo had the opportunity to recognise the annulled poll as its principal beneficiary, but he refused to make history.

He noted that Obasanjo, who was Abiola’s school mate, and former military President Ibrahim Babangida, who annulled the election, despite being his friend, had not reacted to the development, adding that their reaction would not have taken away their own GCFRs.

He objected to the clamour for an award for the defunct National Republican Convention (NRC) candidate, Alhaji Bashir Tofa, saying awards are not meant for losers.

He stressed: “Where are awards given to losers? Nowhere in the world. The winner does not have a ministerial slot for the loser, if he had assumed the reins. The election was about the winner, who had two-third in 28 states of the federation.”

Zwingina said today’s ceremony in Abuja, the Federal Capital Territory (FCT) will lead to a reunion of old friends and compatriots who struggled for the actualisation of June 12.

He said the step taken by the President should deepen the nation’s democracy and foster national unity.

Zwingina added: “We need internal democracy in the parties. We need a party system that will throw up credible and patriotic candidates during primaries.”