The Obong of Calabar, His Royal Majesty, Edidem Ekpo Okon commended the Federal Government for constituting the Board of the Nigerian Maritime Administration and Safety Agency (NIMASA) saying that the calibre of personalities in the Board gives a lot of confidence and hope that the Nigerian maritime industry is set to experience renewed development. 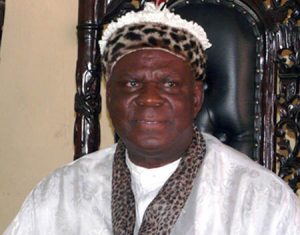 The Obong of Calabar, His Royal Majesty, Edidem Ekpo Okon

The Obong of Calabar who said this while receiving the Board of NIMASA in his palace described the maritime industry as great facilitator of trade and called on the Board to develop a master plan for the advancement of the Nigerian maritime industry.

His Eminence, Edidem Ekpo Okon also urged NIMASA to establish a zonal office in Calabar to engender greater maritime activities in the area and to support the development of the Bakassi deep sea port.

He challenged the Federal Government on the dredging of the Calabar channel which he described as the longest channel linking Nigeria’s coast to the Atlantic Ocean to enable bigger vessels call the Calabar Port.

Earlier, General Jonathan India Garba, the Chairman of the Governing Board of the NIMASA commended the Obong of Calabar for maintaining a peaceful atmosphere in his domain.

The Chair of the NIMASA Board who noted that Calabar is an important Port City also said that the new management at NIMASA will partner other stakeholders to make the Calabar port viable again.

Also speaking, the Director General of the Agency, Dr. Dakuku Peterside said that Calabar has always played a strategic role in the development of the Nigerian maritime industry and assured the Royal Father that NIMASA will do all that is necessary to restore the Calabar Port to its pride of place.

The members of the Board of NIMASA who were led by General Garba to pay homage on the Royal Father in his palace, are in Calabar for strategic retreat on the repositioning of NIMASA and the Nigerian maritime industry.

The Board members who are in Calabar for a three day strategy retreat had earlier paid a courtesy visit on the Governor of Cross River State, Professor Ben Ayade.

Entrepreneurial Education; A Key In The Development Of Economy says MAN President